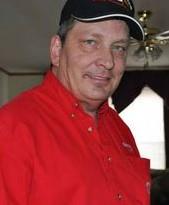 Yesterday, 11/29/20 at 2:39 am, I lost my soulmate, Wolfgang Hartwich Henrich Mahn. He was 59 years young. He was the love of my life. He leaves behind 5 kids, Stephanie, Josephine, Ashley, Phil and Tonya,10 grandchildren, 3 brothers, a sister, a stepfather, a grandfather, his dog Milo, lots of friends, and me.

On 11/6, we both got extremely sick after visiting a clinic 2 days before. I took him to the hospital on November 12 after he complained of not being able to breath. They tested him and found he was positive with COVID. I tested positive as well. Within 3 days he became unresponsive and he could not talk at all. We were getting reports from the hospital daily. Then they moved him to ICU and put him on life support. Some days the news was good and then some days it was not. It was like an out of control roller coaster. I got to the point that I was holding my breath when they called.

We eventually were able to start having Zoom calls. We could see him, and he could hear us talk to him. Twice we were called in because they thought he would not make the night, but he kept fighting.

Since I was still COVID positive, I could not go see him. Even the family that went to the hospital had to see him behind glass. This went on for 17 days until he was done. I got the call late and called Ashley since I knew she would be up. The nurses set up a zoom for us and we spent the last couple hours of his life with us talking to him, sharing stories and sitting with him so he wouldn’t be alone. It was getting late and everyone was tired. Ashley mentioned that we should probably get some sleep. Suddenly his body lifted out of the bed as if he was trying to sit up; and the sensors started going off. The nurses let us know that he was gone. That sneaky man hung up the phone first.

Wolf had a great sense of humor. He loved telling jokes and making people laugh. He was kind and giving. When he saw someone in need, he was the one that pulled off the side of the road to help you fix your flat. He was the one that picked up a family of 6 in the freezing cold and fit them in our truck to get them off the interstate. He was the one that stopped when a van stuffed full of people went flying off the road with people falling out and then stayed with the little girl who was dying.

He loved being a truck driver. I did not think he would ever want to come off the road, but that time did come. He started training truck drivers and learned of his second passion to driving – and that was teaching. I saw the ad for the job and typed up his resume and submitted it. After all, he taught me, and I knew that job was for him. And he was great at it because of his patience and passion for the job. He had a job where he could tell all his trucking stories, and even had a captured audience of students who adored him.

We know you are in a better place now and pain-free. As Phil put it, he is no longer “a slave to his arm". We will miss you my love. Know that you will live in our hearts forever. XOXO

You are not forgotten, my love nor will you ever be –

As long as life and memory last, your soul will live in me.

I will miss you now my heart is sore –

As time goes by, I will miss you more.

Your loving smile, your gentle face –

No one can fill your vacant place. –