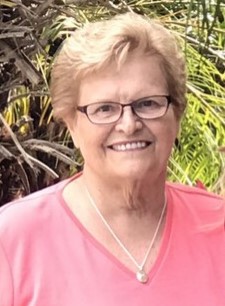 Wilma Jean Corbitt passed away peacefully at home surrounded by family on January 8, 2019 in Jacksonville Beach, FL.  Wilma was born February 06, 1938 to Raymond and Eleanor Heiman in the Township of Medina near Marshall, WI.

Wilma married her husband Bruce Corbitt on December 14, 1957 in Marshall, WI who preceded her in death on November 23, 2016.

Wilma was known around the beach for owning and operating Corbitt’s Nursery.  She also served on the Jacksonville Beach Civil Service Board.  Wilma was very active with faithful attendance in her church, Bethlehem Lutheran. One of her proudest accomplishment was helping to establish Bethlehem Lutheran Daycare in 1986.

Wilma met some of her best life long friends while serving as a DOE at the Elks Lodge.

Wilma retired from the Social Security Administration after 30 years of service.  Following retirement both she and her husband were able to enjoy many months out of the year in her hometown of Marshall, WI.  Family and friends knew she called Florida home, but her heart was always in Wisconsin.

The family will receive visitors at 10:00am on Wednesday, January 16, 2019 at Bethlehem Lutheran Church, with the funeral service following at 11:00am. Interment will be held in H. Warren Smith Cemetery.