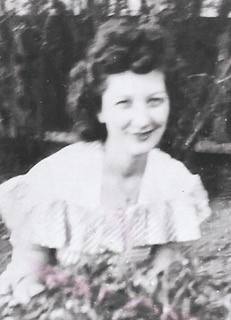 WILLIE GOODSON MEYER passed on to heaven on Sunday, May 2, 2021, at the age of 97.  Members of her family were at her bedside in the days before and at her passing.  She will forever remain in our hearts.

Born in Union Church, Mississippi to Walter and Lonie Goodson, she was the sixth of seven children.  She lived a long, well-traveled and adventurous life.  A part of the greatest generation, she enlisted in the Women’s Army Corps and after basic training in Chattanooga, Tennessee was assigned to Gulfport Army Air Field in Mississippi.  There Willie met Wally when the Army jeep Wally was driving splashed her with mud as he drove past.  The fiery and beautiful Willie soon forgave him, and the rest is history.  They were married for 65 years.

The marriage was a blend of Willie’s southern culture and Wally’s midwestern roots.  Following the end of World War II, Wally took Willie home to Wellsburg, Iowa where their two daughters, Suzanne and Bette, were born.

When the U. S. Air Force recalled Wally during the Korean War, the family became an Air Force family for over 20 years, living in Memphis, Tennessee, Ardmore, Oklahoma, Burtonwood, England, Fort Walton Beach, Merritt Island, and Neptune Beach, Florida.  Not one to play by the book, and at a time when most women did not work outside the home, Willie started a civil service career in Fort Walton Beach that was to last 20 years serving at Eglin Air Force Base, Patrick Air Force Base, and Mayport Naval Air Station.  The Air Force recognized her work with Outstanding Performance Awards, too many to count, for her contributions to the effectiveness of the United States Air Force.

Wherever she lived, her lovely home was the location of parties, elegant dinners, and fun times. She is remembered for her southern hospitality, bountiful cooking, and generosity.  Her grandchildren have cherished memories of summers at their grandparents’ home in Merritt Island, where they remember receiving amazing love and care, and where they had a grand ole time splashing in the pool; watching history as they observed many shuttle launches; making annual trips to Disney World, and always having plenty to eat!

After her retirement and Wally’s, they moved to Neptune Beach, Florida to be nearer to their two daughters and grandchildren.  Wherever she lived Willie made new friends and established lasting friendships.  Always active, Willie joined the Newcomers Club of the Beaches, and later the Alumnae Club enjoying and participating in its gourmet group. She and Wally became active members at Community Presbyterian Church in Atlantic Beach, and celebrated at the church a renewal of their vows upon their 50th wedding anniversary.

When Christ shall come, with shout of acclamation
And take me home, what joy shall fill my heart
Then I shall bow, in humble adoration
And then proclaim, my God, how great Thou art.

A memorial service in celebration of her life will be held at Community Presbyterian Church at a later date.  The family would like to thank the West Wing nursing staff at Derfer Healthcare Pavilion, Fleet Landing, and the Beaches Long Term Care Team of Community Hospice for their loving and compassionate care of our mother and grandmother.