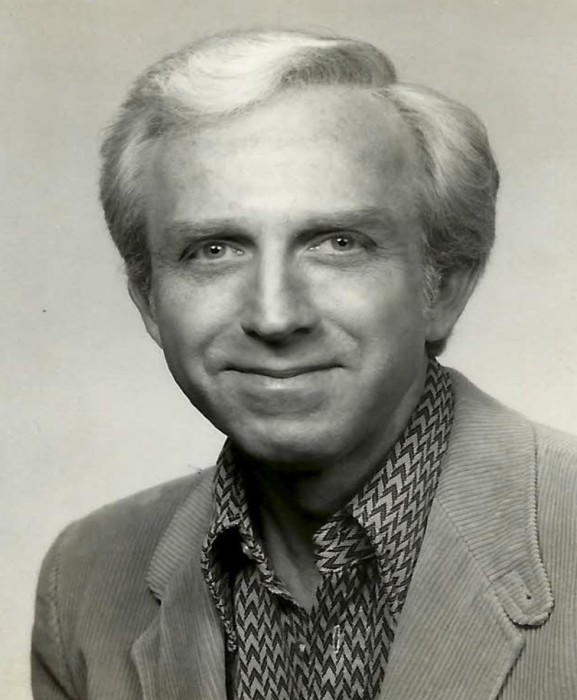 William Garland Herrold Jr. PhD, (Bill) died peacefully on August 23, 2018 after a brief illness. Bill was born in Jackson, Michigan on June 11, 1932.
Bill grew up in Riverside, California and graduated with honors from Riverside Polytechnic High School in 1951. He earned his bachelor’s degree from UCLA, his master’s degree from San Jose State College in California, and his doctorate degree from Brigham Young University in Provo, Utah. Upon graduating from UCLA, Bill was commissioned as a second lieutenant in the United States Army. He was assigned to serve as a training officer at Fort Ord in California. After a short tour of active duty, he was then assigned to a reserve unit in San Francisco. It was there that he met and married his wife Yvonne. In San Francisco Bill worked as a business trainee for Standard Oil but found that sitting eight hours a day in an office pool shuffling papers was not for him. He went back to school, got his teaching credentials and found a career that he loved and followed for the rest of his life.

Bill began teaching in a small farming town in central California. After earning his master’s degree in school administration, he became principal of an elementary school. During those busy and trying years as an administrator he found that too many teachers had no idea how to teach children to read well enough to succeed in school past the third grade. Bill went back to school again to earn his PhD. He became a college professor specializing in the teaching of reading and language arts. In 1974 Bill moved his family to North Florida and accepted a position as a reading professor at The University of North Florida. It was here that he found his true joy and purpose. Bill remained at UNF until his retirement in early 2000 and received the distinction of Professor Emeritus. Bill remained active during his retirement and enjoyed music, gardening and exercising. He became a tutor and board member at Learn to Read and enjoyed working one-on-one with third grade students who were at risk of failing the reading section of the 3rd grade state reading assessment.

Bill is survived by his two sons, Todd and David (Lisa), his grandchildren Emily and Thomas, his sister Kathleen and his brothers Maurice and Ralph. He was predeceased by his father, William G. Herrold Sr., and his mother Helen, his sister Charlotte, his brothers Lionel and Dallas, and the love of his life, his wife Yvonne.

A Memorial Service will be held on Saturday, September 15th at 11 am at Community Presbyterian Church, 150 Sherry Drive, Atlantic Beach, Florida with a reception to follow.

In lieu of flowers, donations in Bill’s memory may be made to: The Bill and Yvonne Herrold Endowed Scholarship at The University of North Florida, 1 UNF Drive, Jacksonville, Florida 32224, or Community Hospice and Palliative Care, 4266 Sunbeam Rd., Jacksonville, FL 32257

The family would like to thank both the residents and staff of Fleet Landing and the Hospice Team for your care and kindness during the last few months of Bill’s life.