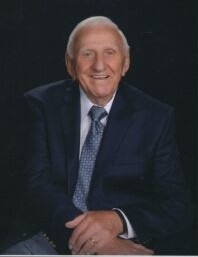 Thomas Janocko, 98, passed away peacefully on April 22, 2022. He was born March 11, 1924, in Forest City, Pennsylvania to Michael Janocko and Eva Homisak. He trained at Camp Mackall, North Carolina with the 11th Airborne Division “Angels” as a paratrooper and served in the Pacific Theater to liberate the Philippines and occupy Japan after its surrender. He was awarded the Good Conduct Medal, Philippines Liberation Medal with two Bronze Stars, American Theater Service Medal, Asiatic Pacific Campaign Medal with three Bronze Stars and one Arrowhead, and WWII Victory Medal. In 2020, he was honored with a ceremony and presented with The Congressional Gold Medal for his service to the United States and The Philippines during WWII.

After discharge from the Army, Thomas met his loving wife, Helen Terry, and they wed in 1953. Married for 68 years, they raised eight children and resided in Elizabeth, NJ for 55 years. They were further blessed with many grandchildren and great grandchildren.

He was a child of the Great Depression and World War II and had seen the world go through many changes during his lifetime. As a member of The Greatest Generation, he was humble, but known to greet everyone with his big smile, twinkling blue eyes, quick wit, and sometimes uncompromising honesty. Tom had boundless energy, loved long walks, was an avid reader, bowler, skilled pool player and a trained carpenter who was always tinkering and could fix anything. A dedicated worker, he retired from General Motors Assembly Plant in Linden, NJ, as an inspector, after working there for 36 years.

In 2008, Tom and Helen moved to Ponte Vedra Beach, Florida, where they enjoyed meeting new friends, attending YMCA Silver Sneakers classes, many travels, and especially visits and celebrations with their ever-growing family.

He was a communicant of St. George Byzantine Catholic Church in Linden, NJ, then became a parishioner of Our Lady Star of the Sea Catholic Church, Ponte Vedra Beach during the past 15 years.

Thomas was predeceased by his parents; son, Stephen; and all 13 of his siblings. He is survived by his wife, Helen; three daughters: Carol Sauer of Jacksonville, FL; Jane Hall (Leon) of Spring, TX; Theresa Picco (Michael) of Ponte Vedra Beach, FL; four sons: Thomas (Gladys) of Oceano, CA; Michael (Donna) of Avenel, NJ; Mark of Avenel, NJ; and Joseph (Eve) on Ponte Vedra Beach, FL; sixteen grandchildren and ten great-grandchildren, all of whom adored him as the patriarch of the family.

In lieu of flowers, please consider a donation in honor of Thomas to Our Lady Star of the Sea Catholic Church or Community Hospice.