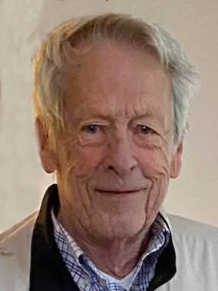 Stuart Paul Smith was born on September 9, 1932 at the Woonsocket, RI  hospital. Son of Chester D. Smith and Martha Mowry Smith, he was raised at the Smith Farm in North Smithfield along with his sisters Nancy, Marcia, and Janice. He gave a graduation speech for the last graduating class of Union Village School, two miles of daily walking up and down the road. He attended Woonsocket High School and was active in the YMCA and captain of one of the four-time Woonsocket High School cross-country championship teams. He graduated from Moses Brown School and attended the University of Rhode Island (URI). At URI, he continued athletics, receiving 11 letters, and was a member of the URI New England championship cross-country team, and Phi Mu Delta Fraternity. He graduated and began a career as an engineer for DuPont in Connecticut.
In 1955, he and Ruby Louisa Seagrave of Uxbridge, MA were married. They have three children – Sally (m. Costas Christ) of Brooksville, ME; Timothy (m. Nina Sporn) of Brooklyn, NY; and Martha (m. Michael Newby) of Salem, OR. They have seven grandchildren: Costas and Nikos; Nola, Romy, and Molly; Sierra and Hannah. Stuart soon discovered that coaching basketball and teaching math were a much better fit for his energetic, athletic mind and body, and he began his lifelong career in education as a teacher and a coach at Salisbury School in Salisbury, CT. Positions as a teaching school administrator soon followed, at Roycemore School in Evanston, IL, and Pembroke Country Day, in Kansas City, MO. In 1969, he became the headmaster of Brooklyn Friends School in Brooklyn, NY, where he was a teaching principal for 10 years. During his tenure, the school grew and prospered, as he nurtured an enriching educational environment for the entire student body, including his own children. Firmly believing that both institutions and individuals prosper from change, he began working as an interim principal in different schools around the country, helping institutions transition to new leadership. Although he and Ruby divorced in the early 1980s, they remained friends.
In the mid-1980’s, Stuart moved to Ponte Vedra Beach, FL, where he continued education consulting, guiding Jacksonville Episcopal High School (Jacksonville, FL), Winston School (Dallas, TX), and Lexington School (Lexington, KY) through transitions. During this time, he met and married a Latin teacher from Maryland, Kathleen Carpenter. “Casey” continues to teach Latin at Ponte Vedra Beach High School. After Stuart retired, he remained an active tennis and golf partner with a dedicated group of friends, and also enjoyed the company of a succession of canine companions, Hector, Brutus, and Fido.
Stuart passed away at his home in Ponte Vedra Beach, surrounded by loved ones, on May 19, 2021. He is survived by his wife Casey, his three children, and his seven grandchildren.