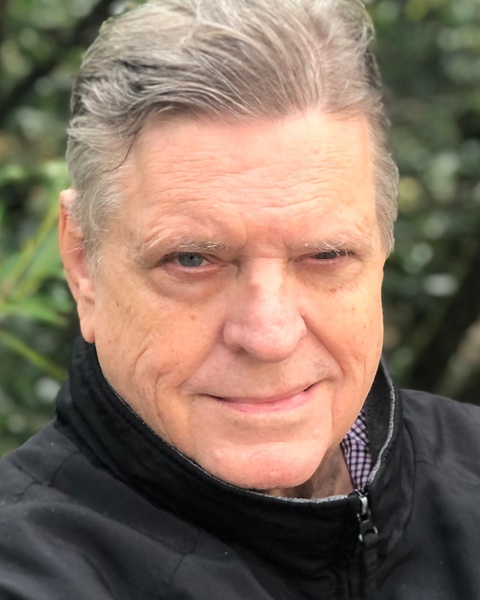 The bright lights of Broadway flickered off, then back on. Movie theatre marquees dimmed for a moment. At 12:37 a.m. on Thursday, September 29, 2022, as hurricane winds swirled and palm trees swayed in a fashion worthy of a Cecil B. DeMille epic, the soul of Stanley Norton departed this earth bound for Eternity. This amazing man, a fountainhead of creative energy, love, faith and generosity for 81 years left life's stage and, each of us — all who knew him — lost a source of inspiration and joy. As Kate, his wife of 34 years, said "Stan's huge, beautiful heart gave out."

At 6'2", Stanley Pallas Norton, Jr could command a room with a presence that radiated curiosity, acceptance and happiness, especially if kids or dogs happened to be there. Deeply empathic and emotional, Stan was as likely to sob openly at a movie moment from “Bambi”, as at the flyover during a Jaguars game or a well-crafted commercial.

Stan loved life, his wife and all of their friends. He adored his children, Michael, Christopher and Elizabeth, and their partners, and they adored him, not just like a dad, but like their best friend. From the moment each of his children were born, Stan devoted his life to making sure they wanted for nothing – not just material things, but love, spiritual guidance, grace. He was their fierce protector and gentle champion – and the fine young adults they have come to be are a testament to Stan's love and guidance.

All of Stan's friends will tell you he was witty, fun and generous. Incredibly generous. He loved treating friends to movies, concerts, plays, the circus, football games. He loved holidays, especially Christmas. He was quick to strike up a conversation with a friend or a stranger, asking questions, cracking jokes. He wanted to know everyone’s story.

Stan was creative, inspiring and delightful. A devout Catholic and member of St. Paul’s Catholic Church, Jacksonville Beach, he prayed the rosary every day. He prayed for Kate, Chris, Mike and Liz, and their partners, Jasmine, Seema and Helge. And he prayed that those who had drifted from faith would return. He was a man of integrity.

Stan and Kate traveled extensively, but NYC was his favorite. From the moment his parents took him there as a six-year-old, the whole family driving up from Jacksonville, and he entered the bronze doors of Radio City Music Hall, he fell in love with the city that never sleeps and with movies.

Stan adored old movie palaces and was instrumental in the first campaign to save the Florida Theatre in downtown Jacksonville. For years, Stan's garage was converted into a movie theatre complete with curtains, film shorts, cartoons, coming attractions and a feature film all accompanied by popcorn served in authentic red and white boxes.

Stan knew every line and shot in Gone with The Wind and Selznick's thinking behind them. Watching Hitchcock's The Birds with him was a master class in editing and directing. Most recently, he thought Baz Luhrmann's Elvis was a near-perfect film.

Stan was born at St. Vincent’s hospital in Jacksonville, Florida and graduated from Bishop Kenny High School. He received his B.A. at Belmont Abbey College, where he also met two people who would become his lifelong friends, his roommate, John Caven, and underclassman, Jeff McGowan. Stan went on to Boston University to work on his M.A. and discover his life's work and professional passion. As a young television intern, he worked at WGBH in Boston and was a floor manager for The French Chef with Julia Childs. There he developed a soon-to-be-famous impression of Ms. Childs as well as a gift for making wonderful souffles -with BUTTER!

Kindness was Stan’s superpower and his hugs were legendary. He was a big tipper and often reached out to help people on the street. They didn’t need to ask or hold up a sign. If someone looked like they needed help, Stan would stop and talk to them and give them whatever he had.

Stan adored animals. Stray dogs and cats often found refuge in the Norton home and were treated to road trips complete with drive through feasts at local fast-food restaurants.

When Stan and Kate announced they were pregnant with twins – Christopher Pallas and Michael Anthony – his friends were happy to know that Stan would soon have kids his own age to play with. And he did. The boys became his "partners in crime" for many escapades. Later, when Elizabeth Marie arrived, Stan had a performing partner, ready to share the spotlight at parties and weddings with duets like "Anything You Can Do, I Can Do Better” from Annie Get Your Gun. As his children grew up, their friends came to appreciate the carpool Dad who always offered to stop at Dairy Queen on the way home. Liz’ best friend Lizzie put it best, “I love Mr. Stan. He never says “No.”

Stan spent most of his professional life at William Cook Advertising, the region's largest independent ad agency. As Vice President and Creative Director, Stan was one of the original “Mad Men” and he was known for suggesting just the right touch to take a campaign from good to great. Stan's work included Winn-Dixie's "The Beef People," Atlantic Bank's introduction of ATM’s featuring the late Leonard Nimoy, the campaign establishing Florida's First Coast and many others. Stan's work and creative leadership won countless awards for the agency including Clios and ADDYs, the ad industry's gold standards. He was also a mentor and a mensch for many young advertising professionals.

Although Stan retired from the agency business, he never stopped working. Dozens of organizations benefitted from Stan's extraordinary talent as a video editor.  Stan treated every project as a film, a story that needed to be told and underscored with the perfect music cue at just the right moment. Stan could make you laugh and cry and, especially in the case of non-profit fundraising, give. He was both humble and proud, as only Stan could be, of the videos he created for the Diocese of St. Augustine, Queen of Peace Church in Gainesville, St. Michael’s Church in Fernandina Beach, Sulzbacher Center, Jewish Community Alliance, Hubbard House and many more – not to mention Father Bill Kelly’s 50th Anniversary video.

Stan was a 40-plus year resident of Atlantic Beach. He was preceded in death by parents: Stanley Pallas, Sr. and Mary Norton. Along with his loving wife and children, Stan is survived by his beloved sister, Mary Ann Lybarger of Belleville, IL, nephew Cloice Lybarger and his wife Bridget and children (Alexis, Stella, Cloice, Jr.)

A funeral Mass celebrating Stan's life will be held on Saturday, October 22nd, 2022. The Rosary will be offered at 10 a.m. and Mass at 11 a.m. at the Old St. Paul's Catholic Church, First Avenue North, Jacksonville Beach, FL 32250. The service will be led by Father Jeff McGowan and concelebrants. Arrangements under the direction of Quinn-Shalz Family Funeral Home, Jacksonville Beach, FL.

In lieu of flowers, please make memorial gifts to Catholic Charities, L'Arche Jacksonville, Friends of Jacksonville Animals (FOJA) or the charity of your choice.

And hug a loved one, forgive a wrong, give to those who need a little kindness, adopt a cat or dog, go to church, go to a movie or play, call your mom, raise a glass to a great human who will be missed by many. Stan would be happy for you to do any of these things.