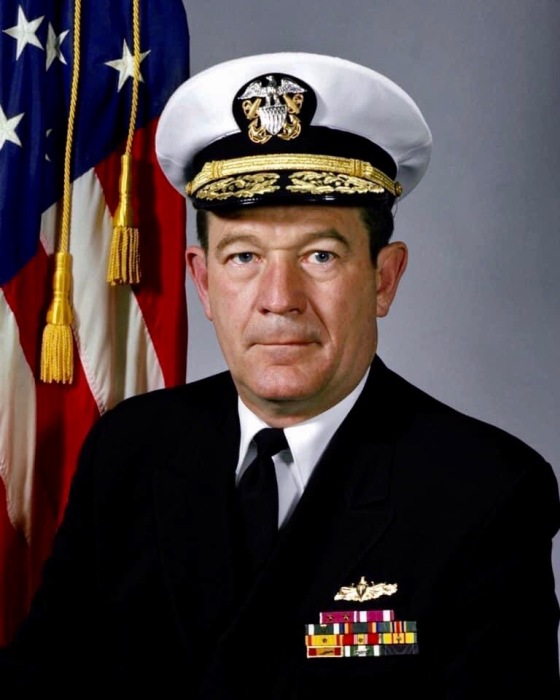 After spending his childhood on a farm in Oklahoma, David’s family moved to The Dalles, Oregon, where he attended The Dalles High School. There he was a member of the State Championship football team and graduated as class Salutatorian. He entered the U.S. Naval Academy in 1949 and graduated 17th of 926 in the class of 1953. While at the Naval Academy, he was introduced to Dolores at the 1950 Army-Navy Game by a fellow midshipman and his future brother-in-law, beginning a life-long love story. At graduation, David was commissioned a Navy Ensign and married Dolores four months later on October 17th. During his 30-year naval career, he earned an MBA from Stanford University and specialized in logistics and financial management. Among his assignments were Commanding Officer of the Navy Supply Corps School, Supply Officer aboard the aircraft carrier USS AMERICA (CV 66), Executive Assistant to the Assistant Secretary of Defense (Comptroller), and Deputy Comptroller of the Navy. Among his many talents, David was known in the Pentagon as an especially gifted speechwriter.

Following his distinguished military career, David joined the Board of Governors of the Federal Reserve in Washington, D.C., where he served as Staff Director for Management for sixteen years under the Chairmanships of Paul Volcker and Alan Greenspan. This is the highest non-presidential appointed position at the Federal Reserve.

David was a devoted Catholic, a member of Knights of Malta, and served as Eucharistic Minister, usher, Parish Council member, and Finance Committee Chair of St. Marks Catholic Church in Vienna, Virginia. David’s principal hobby was antique cars—he was a member of the Model A Ford Club of America, fully restored a 1931 Model A Ford roadster, and drove the car to work for many years. He also enjoyed sports, fishing, and woodworking. He could build or rebuild just about anything, including cars, home additions, electrical wiring, furniture and more; there was no challenge too great.

Interment will take place this fall at the U.S. Naval Academy Cemetery with full military honors following a Funeral Mass at the Naval Academy Chapel.