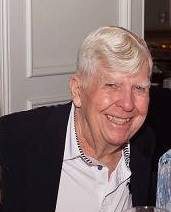 Bob was born in New York City on July 2, 1931 to a proud family of Irish immigrants. At 17, he joined the United States Marine Corps, which became his first love. He married his second, Donna Jean Maas, in 1951.

Bob believed in living a life of service, from his 22 years in the Marine Corps, to years of volunteering for Habitat for Humanity, to his term as President of Selva Marina Country Club. He completed a second career with Ace Electric before retiring completely in 1991 to focus on golfing, boating, and traveling with family and friends. He could often be found walking in Atlantic Beach, reading on his balcony, and always with a jug of wine at his side! He was passionate about his family and never missed an opportunity to talk about his pride in their accomplishments, or to catch up with their latest news on Facebook. He will be remembered for his infectious sense of humor, his booming voice, his energetic dancing, and his insatiable sweet tooth.

While heartbroken, his family is grateful for the honor of knowing and loving Bob, and for the gift of the 90 wonderful years he lived. Certainly, he has taken up his watch in Heaven, as he promised all Marines do.

A Memorial will be held at a later date. Donations in Bob’s honor can be made to Community Hospice & Palliative Care Attn: Pediatric Home, 4266 Sunbeam Road, Jacksonville, FL 32257.