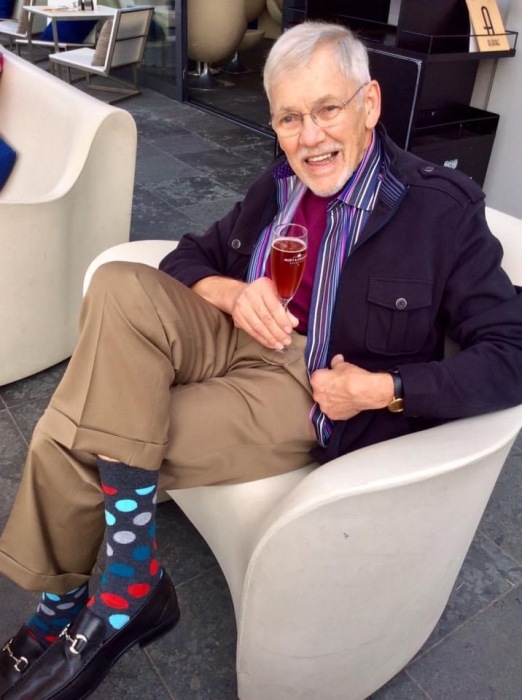 Born January 20, 1944, in Zurich, Switzerland, Rene Heinrich Schiegg passed away peacefully on Monday, August 9th, at the Mayo Clinic in Jacksonville, Florida. His “girls” – wife Esther and daughter Nicole – were at his side.

Rene’s journey through life started from humble beginnings. At the young age of 16, he left home with a set of cooking knives gifted to him from his parents, along with a little pocket money. Rene began his storied career with a cooking apprenticeship in Bern, where he quickly fell in love with being in the kitchen. However, his next move would require him to leave his home country for a little island he had to find in an atlas: Bermuda. After working with a handful of hotels on the island with Trust House Forte, Rene joined the Holiday Inn system in 1971 as the executive chef of the Holiday Inn Resort in St. George’s. At the eager age of 27, he had a kitchen brigade of 100 serving under his capable leadership. As he worked long hours and continued to discover his gastronomic swagger, he would also meet the person who would change his life forever. Rene knew a young Swiss woman by the name of Esther was joining the hotel to manage payroll. However, what he didn’t know is that she would arrive in hot pants, a maxi coat, “Nancy Sinatra” boots, and beautiful long hair that flowed down to her waist. On Esther’s first Monday working at the resort, the Food and Beverage team made sure he was the one to walk down the hill to get the kitchen’s mail. Rene would entice Esther with bündnerfleisch – a dried aged beef from Switzerland – and the love story began. Married on October 21st, 1972, Rene and Esther never thought they would leave quaint Bermuda for another foreign land – the United States of America. They would become dual citizens of Switzerland and the United States in 1999.

Rene’s career catapulted when he captained the team that won the “National Salon of Culinary Arts Grand Prize” award, on behalf of the International Association of Holiday Inns, which was held in Chicago. In 1976, he was honored to join the U.S. Culinary Olympic team where he won two Gold Medals and a Special Award. While Rene continued to cook throughout his life, his career would then go in a manager direction. However, a few years later, he would accept the biggest management role of his life. While at the Holiday Inn Vanderbilt in Nashville, Rene and Esther welcomed a new addition to their family--their daughter Nicole. Rene quickly embraced his role as a “girl dad” and continuously found ways to support and empower his precious Nicole.

The Schieggs moved with Rene’s career – from Knoxville to New Orleans to Houston to Richmond to Tampa and to Ponte Vedra Beach. He was an avid member of several organizations, notably the tourism society Skål International, the host committee for the Gator Bowl, and the Beaches Chamber of Commerce; the latter influenced the Atlantic Beach Town Center’s beautification. Rene was an Officier Commandeur in La Chaîne des Rôtisseurs – the world’s oldest and largest gourmet society – and served as Bailli (head) of his local chapter on the First Coast. He was delighted to induct Nicole into La Chaîne and was proud that she was recently elevated to Bailli of her own chapter in the Washington, D.C., area. Rene visited Nicole often over the years, especially when she was attending Auburn University, and they loved to dine - including seven times at The Inn at Little Washington – as well as traveling to sample and enjoy new food and drink. Whether it was cruising with Windstar with Esther or looking for cheetahs in Maasai Mara, Kenya, with Nicole - Rene always enjoyed experiencing the cultures and scenes from other parts of the world and pushed himself even when his body was not on the same page. Two years ago, he enjoyed lunch with his “girls” at the top of Jungfraujoch in Switzerland - 11,362 feet above sea level. His endurance is an inspiration to his family, friends, and so many others.

No matter where they resided, the Schieggs had lots of friends and the hottest ticket in town was always their annual Christmas party. Rene would put on a show at his home during the holidays – easily his favorite time of year – making goodies like his signature Quiche Lorraine and Chicken Liver Mousse from his team’s Culinary Olympic cookbook. Later in life, Rene took up collecting almost two hundred Santa Clauses. Like Santa, anyone who knew Rene would tell you about his big heart. He always wanted to find a way to surprise his “girls,” help a friend, or simply brighten a person’s day.

In lieu of flowers please consider a donation to the Michael J. Fox Foundation for Parkinson's Research. Rene retired from a property he loved - the Historic Hilton Bayfront Hotel in St. Augustine. A Celebration of Life will be held at the Hilton St. Augustine Historic Bayfront on Monday, August 16th at 3pm.

Provided by
To order memorial trees in memory of Rene Schiegg, please visit our tree store.