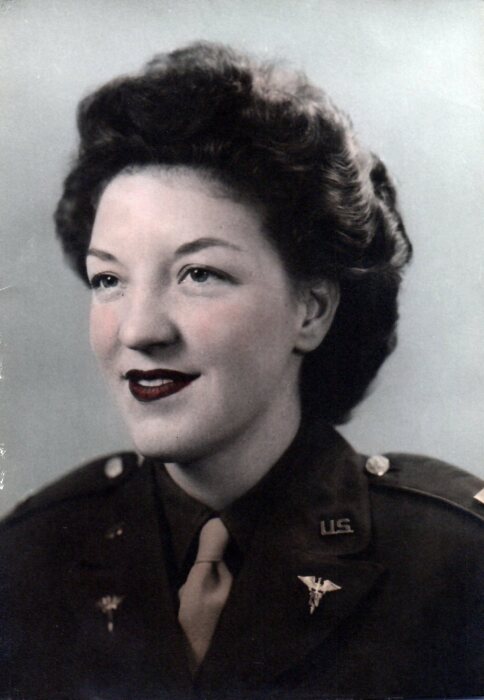 Ramona Therese McCormick, 100, passed away peacefully at home in Jacksonville Beach, FL surrounded by loved ones on September 22, 2021. She was born in Chicago, Illinois on April 10, 1921, the daughter of Francis P Music and Anna Stefanski Music.

Growing up on Mozart Street in Chicago, she was a member of an all-female swing band and played the drums in the 1930s. Ramona graduated from nursing school at Loyola University in Chicago, and then served with distinction in the United States Army as a 1st Lieutenant for the 56th Evacuation Hospital during World War II.  She received four battlefield stars serving in Northern Africa, Salerno and on the beachhead in the Battle of Anzio. She was Treasurer and President of the Anzio Beachhead Veterans Organization. She returned to Anzio several times.  Ramona was an operating room nurse as well as a  nurse anesthetist during World War II. After the war, Ramona was a member of the Macungie Ambulance Corps and the Macungie VFW. She visited the White House many times in honor of her war efforts in Anzio during World War II.

Ramona married Bernard H McCormick Sr. immediately after the war. She and Bernard raised their seven children in Lima, Ohio and Macungie, Pennsylvania, moving there in the early fifties. She enjoyed travelling with her husband and children around the country and later around the world. She was a loved and cherished musician playing piano, accordion and the drums and throughout her life you would find her often singing songs with her children and grandchildren and teaching them instruments, filling her family’s home with music.

Ramona was well known in Macungie for whistling her family home from the playground for dinner. Dinner was always at 5.  Ramona was known for her homemade bread, jelly and kielbasa, and everything she cooked was always hot and satisfying which was evidenced by the size of her family. Ramona made beautiful quilts as an accomplished seamstress and was an avid sports fan, especially football.

Mrs. McCormick worked for many years as an operating room nurse and Assistant Supervisor at Sacred Heart and Allentown Hospitals and in 1995 she retired to Jacksonville Beach, FL where she continued participating in charitable community services and baking bread for family and friends.

Ramona was a loving daughter, sister, wife, mother, grandmother and great grandmother and will truly be missed. Her strong Catholic faith in God was reflected in all that she did and guided her throughout her life. She cherished every season of her life and was grateful for every day.

Mass services will be held on October Fourth in Jacksonville, Florida at 11 AM at Our Lady Star of the Sea Church, 545 A1A North, Ponte Vedra Beach, Florida. Burial services will be on October Eighth following the 10 AM Rosary at the Shantz Funeral Home in Emmaus, Pennsylvania with internment at the St Ann’s Calvary Cemetery. In lieu of flowers please give to the charity of your choice in Mom’s name.

Ramona T McCormick lived a long and fruitful life filled with excitement, adventure, terror, joy, and love.  She did so by not stressing the small stuff and not wasting time. We love you very, very much. God speed Ramona.