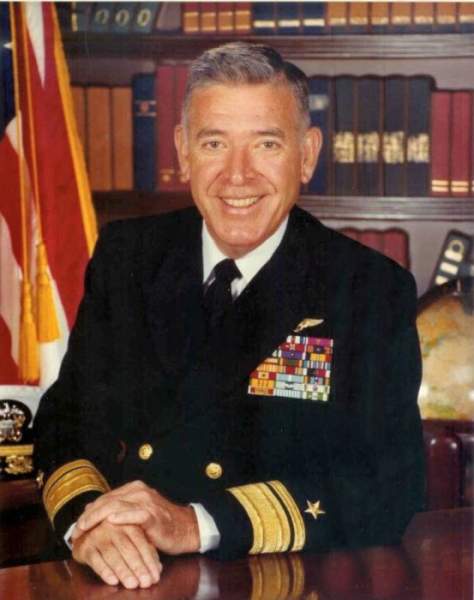 Our Eagle has flown! It is with a heavy heart that we announce that Rear Admiral Robert Byron Fuller has “slipped the surly bonds of earth” and passed away at the age of 91 on Friday, October 4, 2019 surrounded by family. We have lost a true American patriot and hero. Born in Quitman, MS and raised in Jacksonville, FL, Byron enlisted in the Navy following high school in 1945 and was assigned to the USS WALDRON a World War II Destroyer. He later received an appointment to the United States Naval Academy, graduating in 1951.

Byron met Mary Anne McGinley in the 9th grade when they both attended Landon High School. They were married at NAS Jacksonville, in 1952, embarking on an exciting and interesting life together. Upon receiving his Navy “Wings of Gold”, he was assigned to various Fighter and Attack squadrons deploying on the carriers USS Oriskany and USS Ticonderoga, flying F9F Panthers, Cougars & F2H Banshees and A-4 Skyhawks. He was one of the Naval Aviators who flew the flight sequences for the movie, “The Bridges at Toko Ri” in 1954.

Assigned as Executive Officer then Commanding Officer of Attack Squadron 76 at NAS Lemoore, CA, he deployed to Vietnam on board USS BON HOMME RICHARD. On his 110th combat mission, Byron was shot down, captured and held as a Prisoner of War (POW) from July 1967 to March 1973 (68 months), 25 of these months in solitary confinement. For “Extraordinary Heroism as a Prisoner of War” he was awarded the Navy Cross, our nation’s second highest honor. His other awards for valor include two Silver Stars, four Distinguished Flying Crosses, two Bronze Stars, two Purple Hearts and the POW Medal.

Byron returned home to Jacksonville as part of “Operation Homecoming” and was reunited with his family in March 1973. He returned to active service and went on to command the Fast Combat Support Ship, USS DETROIT and the Aircraft Carrier, USS AMERICA.  Upon selection for flag rank, after a tour in the Pentagon, he commanded Carrier Battle Group 4.  He retired from active duty in 1982 after 37 years of service.

Upon retirement he started his second career at Sun State Marine, a Tugboat and Ship Building/ Repair company. Here he served as Vice President and eventually retired as President. During this time, he served for many years on the Board of Directors of the Wolfson’s Children’s Hospital and eventually served as the Chairman of the Board. Byron also served as a founding board member of the Fleet Landing Retirement Community in Atlantic Beach.

He and Mary Anne built and lived in the home he envisioned while a POW in Jacksonville Beach. He will be remembered for his love of spending time with his family and friends, sailing his sailboat, the “America II” and flying his open cockpit biplanes. Every moment with family was treated as a gift and was cherished by all. He leaves a family who has thrived because of his presence. There is now a void that will never be filled. He was our shining star and role model.

We wish you fair winds and following seas Admiral, you have stood the watch and now stand relieved. We have the watch and are grateful to you for all you have done for us, you will be in our hearts forever.

Services will be held at The All Saints Chapel, NAS Jacksonville at 1pm, Friday October 11, 2019. All guests are welcome to attend the memorial service.  Those attending the service should proceed via the Birmingham Gate - gate closest to I-295. If you do not have a military ID card, you are kindly asked to register your attendance with the Base Point of Contact at 904.542.8513 or email Jeffrey.s.thacker@navy.mil in order to expedite your access to the base. All personnel entering NAS Jax are required to present a valid picture ID.

The family will greet guests at the Florida Yacht Club, 5120 Yacht Club Road immediately after the service.

In lieu of flowers, donations can be made to Fleet Landing, 1 Fleet Landing Blvd., Atlantic Beach, FL 32233 designated for Nancy House or to Community Hospice, 4266 Sunbeam Road, Jacksonville, FL 32257.