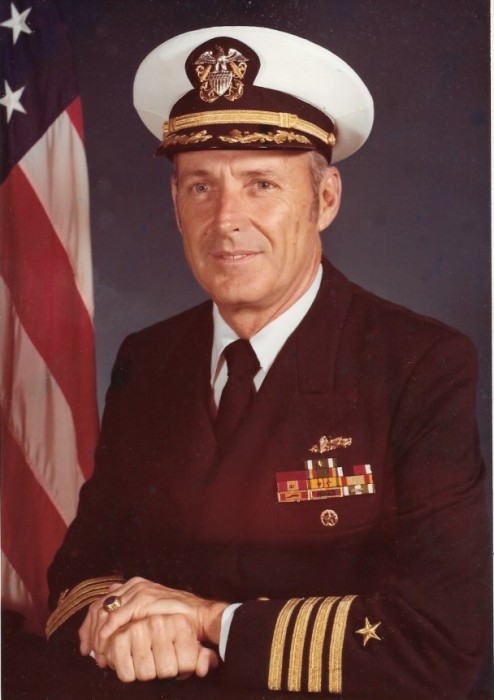 Morton Howard Hanson, CAPT, USN (Retired) passed away at the age of 89 on July 4, 2019.  He was born in Lynn, Massachusetts on August 5, 1929 to Vera and Howard Hanson.  After graduating high school, Mort enlisted in the Navy and served for 5 years as a Combat Air Crewman.  He was then accepted into the United States Naval Academy, graduating in 1956.  He proudly served his country for 34 years. His years of service in the Navy included being liaison officer for President John F. Kennedy during the President’s summers in Rhode Island,  a tour in Vietnam as Assistant Chief of Staff for Vietnamese Navy Matters, tours in the Mediterranean and Commanding Officer of the destroyer USS Sarsfield, home ported in Mayport Florida.  Mort retired from the Navy as a Captain in 1982.

He and his family settled in Atlantic Beach where he owned and operated Bio Max Natural Foods. He was a member of St. Paul’s By-The-Sea Episcopal Church for many years. In 1991 Mort founded the Beaches Sea Turtle Patrol and devoted the rest of his life to the preservation of endangered sea turtles.

He passed away peacefully surrounded by his devoted wife of 63 years Jeanette, and his immediate family.

A celebration of his life will be held at St. Paul's By-The-Sea Episcopal Church, 465 11th Ave. N, Jax Beach on August 3, 2019 at 11 a.m. followed by interment in the memorial gardens with military honors.

In Mort's honor, donations may be made to the Beaches Sea Turtle Patrol or the St. Paul's By-The-Sea Episcopal Church memorial fund.