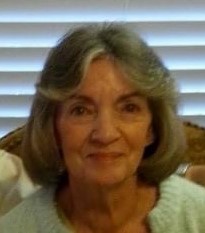 Miriam Elizabeth Holler, 77, died peacefully Friday, October 23, 2020 at home in the company of her husband, Boyce from complications of Alzheimer’s Disease.

Miriam was born September 6, 1943 in Jacksonville, Florida to Willard and Josie Geiger. She grew up on the westside of Jacksonville and attended Forest High School where she was Head Cheerleader. She was happily married to Boyce Dwight Holler, Sr. who moved her to Jacksonville Beach to create a wonderful life. They just celebrated their 50th wedding anniversary. She was a homemaker and enjoyed spending time with her husband, watching their children play numerous sports, gardening, cooking out and caring for their cats. She was known as “Gran Gran” to her grandchildren and cared deeply for them having them over for weekends and teaching them to bake, sew, and craft. Her favorite place to be was at the home she designed, and her husband built in Palm Valley. She also enjoyed sharing the hobby of “Junktiquing” with her husband, her daughter Cindy, her sister JoAnn and niece Cathy. She could go junking for hours on end with them at antique stores, garage sales and thrift stores.

Miriam will be cremated and set to rest at the Jacksonville National Cemetery, 4083 Lannie Rd., Jacksonville, Florida. The Memorial Service will be held at Palm Valley Baptist Church in Ponte Vedra, to be announced later. In lieu of flowers, memorial donations may be made in her name to Community Hospice & Palliative Care, 4266 Sunbeam Road, Jacksonville, FL 32257 or give online at support.communityhospice.com.