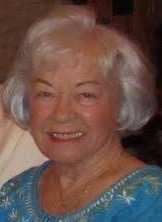 Mary Dwyer Gressett was born on August 19, 1932 in Metairie, Louisiana, which is the first suburb of New Orleans.  She was a wife and mother who loved and cared for her family and friends.  She departed on June 7, 2019.  In her early life, she enjoyed being an aunt and helping to care for her nephews and nieces in New Orleans.  She also worked at AT&T as an operator until she met and married her husband, Otho “Jim” Columbus Gressett, Jr. who was a naval officer.  They were married on May 19, 1962 and spent the next 52 years making friends and raising a family while living in California, Japan, Louisiana, Mississippi, Georgia and Florida.  She loved children and after her sons were raised she became “Nana” and helped raise the children of two families in Jacksonville Beach, Florida.  Annika, Katrina, Katie, Stewart and “Kimmy” were like grandchildren to her.

After the passing of her husband on November 2, 2014, she lived in Ponte Vedra Beach, Florida.  She leaves behind her sons Chris and Randall; stepson Michael “Scott”; and three grandchildren, James, Grace and Bailey.  Her remaining family members and friends are grateful for the positive influence and love she brought to their lives.  Her memory will be cherished and preserved by all those who were fortunate to have known her.

Visitation will be held from 6:00 to 8:00 p.m., Thursday, June 13th in Quinn-Shalz Family Funeral Home.  A Mass of Christian Burial will be celebrated by her family and friends at 11:00 a.m., Friday, June 14th in Our Lady Star of the Sea Catholic Church in Ponte Vedra Beach.  She will be laid to rest with her husband at the Jacksonville National Cemetery following at 1:30 p.m.