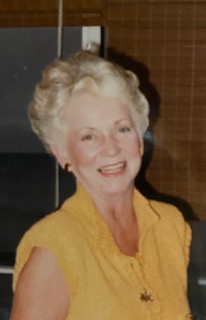 FULLER, Mary Anne McGinley. Our greatest treasure has gone to heaven! On Sunday, January 23rd, the light of our lives, Mary Anne Fuller passed peacefully away at home after a brief illness at the age of 93. She was a dedicated and courageous Navy wife, loving mother, grandmother, great grandmother, and a gifted artist. She truly was the star that guided our life’s journey. She is now reunited with her beloved husband of 67 years, Byron. Called “Mango and Admiral” by their grandchildren, they met in 9th grade Latin class at Landon High School.

She was born to the late James A. McGinley Jr. and late Dorothy B. McGinley on August 12, 1928, in Indiana, Pennsylvania. The family relocated to Jacksonville in 1940. She attended Florida State University during its transition to a coed university where she was a member of Pi Beta Phi, graduating in 1950. She and Byron were married at NAS Jacksonville, in 1952, embarking on an exciting and interesting life together as then Ensign Fuller began his career as a Naval Aviator.

She and Byron moved often, to California, Georgia, and Washington DC, but Jacksonville was always home. On July 14, 1967, then CDR Fuller was shot down over North Vietnam and began his almost 6 years of captivity at the hands of the North Vietnamese. Following their plan, Mary Anne moved the four children from their California home to Jacksonville, settling in their former neighborhood of Venetia. In addition to raising four children on her own she organized and led the efforts of the Florida Chapter of National League of Families of Prisoners of War in Southeast Asia. This required many trips to Washington DC, where she was part of the delegation that met with Senators, Congressmen, and the President. This organization of wives of prisoners shone a light on the prisoner’s mistreatment and torture, directly resulting in better conditions for the POW’s and their eventual release.

The family was reunited in March of 1973 and Byron returned to the Navy, retiring as a Rear Admiral. They built the home at the beach that he had envisioned while in captivity with the spectacular views of the ocean. Mary Anne was able to enjoy her ocean view until her last days. Here she pursued her talents of sewing, making many beautiful things for her grandchildren, and painting. Today, her paintings adorn the homes of all her family members.

Young at heart, always smiling and positive, her four children were her pride and joy, and she relished their accomplishments. The perfect grandmother, she cherished the time she spent with each of her grandchildren, and they loved being with her. She taught them that there is so much value in being creative and using their imaginations. There was nothing better than spending the day with Mango.

Our family will be eternally grateful to her caregivers over the last six years, Elena Ionicha who was with us from the first day, Debbie Cochran, Sabrina Powers, and Tiffany Richardson.

We will miss her beyond words…there will never be another Mango!

Donations can be made in her honor to Community Hospice and Palliative Care, 4266 Sunbeam Rd, Jacksonville, FL 32257.