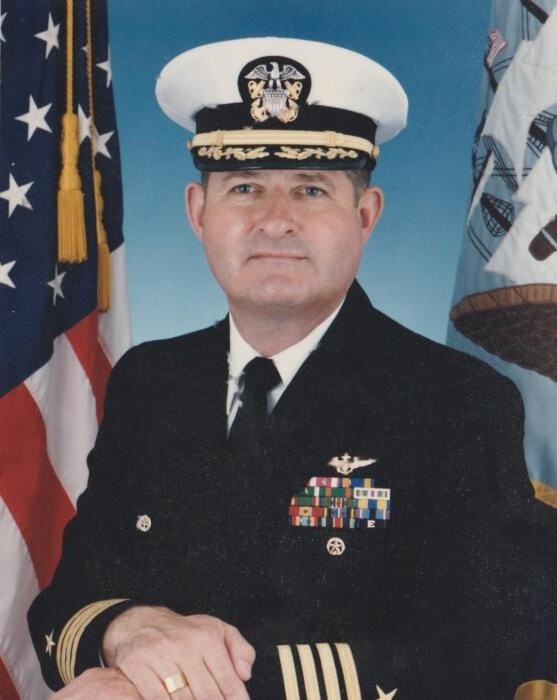 He was born into a military aviation family in post-war Japan in 1948. During his formative years, he lived in TX, NY, Germany, MI and Madison, WI. In June 1966, he graduated from Madison’s LaFollette HS. In January 1970, he graduated from the University of Wisconsin and was commissioned via NROTC.

He next served in Washington, DC, where he met his wife, Lora, who was a Retail Buyer for The Hecht Co. In 1972, they married, and Lora joined Kirk in TX.

He was designated a Naval Aviator in 1973. The couple moved to CA and he was deployed to Vietnam aboard USS Coral Sea. During his distinguished Navy career of more than 30 years, he piloted several aircraft types, predominately the A7-E. In 1976, the Lewises arrived in Jacksonville, FL where he served numerous tours in USS Forrestal and commanded VA-105, NAS Cecil Field and the NROTC Unit at Jacksonville University. He served on Boards of Navy-Marine Corps Relief Society, American Red Cross and St Johns Country Day School.

In between Jacksonville tours, Kirk attended the Naval War College in Newport, RI. He served twice in Europe: with NATO in the NL, and in London, UK. He earned three master’s degrees, most recently an EMBA from JU.

After Navy retirement in 2001, he managed Adult Degree and Aviation programs at JU. Later, he worked as Operations Manager for a family-owned company before retiring to a life of volunteer service. He was an active member of the civic leadership group, Meninak. For 10 years, he directed the volunteer teams counting Red Kettle contributions for NE FL Salvation Army. In 2016, Meninak awarded him the prestigious Gladys Harris Memorial Award for this work. Salvation Army honored him that same year.

Services are at St Justin Martyr Orthodox Church, 12460 Old St Augustine Rd, Jacksonville, FL 32258. Funeral service and Liturgy for the Departed require pre-registration. The Fellowship Hall will be open for overflow and both services will be live-streamed. All attendees must be masked.

Liturgy for the Departed 10a