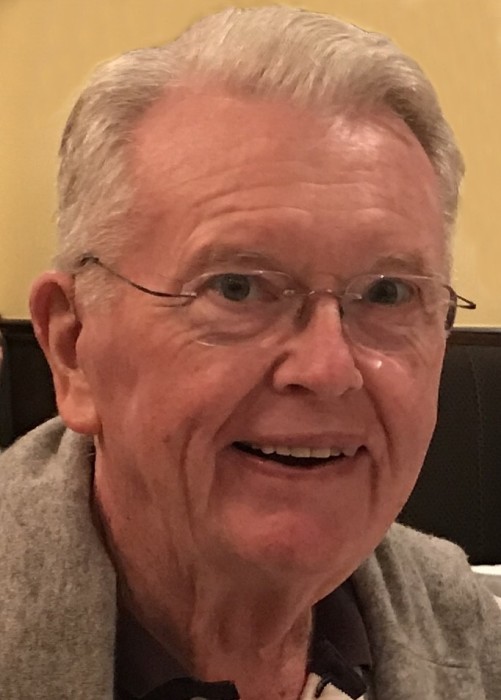 Because of transportation issues due to the Coronavirus the family has postponed all services at this time. Please continue to check our website for service updates.

All who knew John can attest to his incredible musical talent. He could play anything on the piano in any key, no music necessary. While at Princeton, he accompanied the Nassau Jazz Band on a tour of Europe. John and Anne never missed a major Princeton reunion and were blessed to travel with Princeton classmates and their wives to numerous “mini reunions” around the world. For many years John was a regular at “Jazz at Noon,” in Manhattan, playing with some of the most talented amateurs in the city as well as a few great professionals, including Dave Brubeck, Buddy Guy, and Warren Chiasson. He pursued his passion for jazz piano and composition taking numerous courses later in life at The Mannes School in Manhattan as well as the University of North Florida. He volunteered his piano talent every Wednesday at the Mayo Clinic in Jacksonville, FL.  John also volunteered his time and talents with the St. Vincent de Paul Society, Mission House, BEAM, and Lend an Ear in Jacksonville Beach.

He was a member of The University Glee Club of New York, the Heritage Singers of Jacksonville, and the Jacksonville Symphony Chorus. All of his children and grandchildren inherited his love of music and musical gifts. He and the family were welcome guests at many a party where they could be enticed to perform in four part harmony. In fact, his family sent him off to Heaven in song with the “Irish Blessing.” He was also an accomplished painter of water colors, creating gorgeous memories on paper of his beloved time with Anne and dear friends both in Barbados and Buck Hill Falls, PA.

As a young man, John got his start in pharmaceutical sales, eventually settling into pharmaceutical advertising and marketing. He later founded his own agencies, J.R. Druid Associates, Ruvane-Leverte and JAR-COM, Inc., all in New York City.  He secured a trademark on a single sponsor medical publication, “Point Counterpoint.”  He served as Program Manager and then President of the Pharmaceutical Advertising Council of New York City.

John was an avid golfer and enjoyed memberships at Essex County Country Club and Canoe Brook Country Club in NJ, Buck Hill Golf Club in PA, as well as Sawgrass Country Club in Ponte Vedra Beach, FL. John was proud of his Irish heritage, tracking down the Ruane cousins and the family farm in County Mayo, Ireland. There were few books he had not read; he took great pleasure in sharing his knowledge and opinions on just about everything with anyone whose ear he was able to commandeer. He wore his beautiful smile everywhere he went. He was immensely proud of all of his children and grandchildren.  He was a devout Roman Catholic, a member of Our Lady Star of the Sea Catholic Church in Ponte Vedra Beach where he regularly treated the congregation to his jazzy piano meditations.  He is survived by his wife, Anne, his children and grandchildren, his sister, Anne Julie McKelvey of Melbourne, FL and many nieces and nephews and his dog, Barley. His brother, Joseph Jerome Ruvane, Jr., predeceased him.

A Mass of Christian Burial will be celebrated at 10:30 a.m. on Saturday, March 21, 2020 at Our Lady Star of the Sea Catholic Church in Ponte Vedra Beach with the Reverend Matt King as Celebrant. A Memorial Mass will be celebrated at Saint Mary’s Abbey, The Delbarton School, Mendham, NJ at a later date.