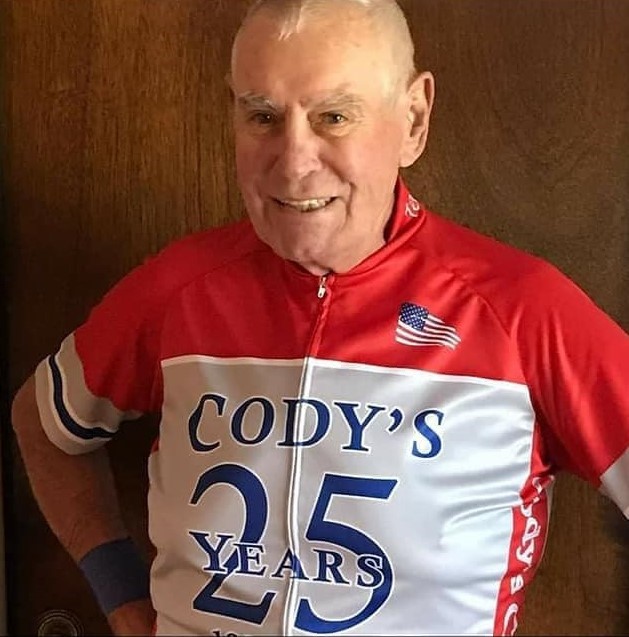 Joe C. Pelley, age 84 of Ponte Vedra Beach died peacefully on Saturday, December 5, 2020. Joe was born October 17, 1936 in Lexington, KY. Joe passed as he lived: he wrote his own rules paving his own way, he often said if he were ever told he could not do it, he would make sure he did.

Members of the Ponte Vedra and Jacksonville Beach communities would recognize him best as the guy who walks in the road waving (waving has several connotations here) to cars as they pass. He began walking our community several years ago because of failing eyesight that prevented him from riding his bicycle. Joe adored his walks around the community chatting with others who were enjoying a walk or run along the same route. He loved his community and its people often sharing the conversations he encountered during his daily walks with those who paid him a visit at his home.

Joe was an aspiring as well as an inspirational athlete, who only wanted to keep up with the team. His team, Cody’s Challenge, was an eclectic mix of people, most half his age, who used their athletic abilities to raise money and awareness for persons afflicted with Multiple Sclerosis. Whether it was the MS 150, bicycle ride to end Multiple Sclerosis, or the Gate River run, Joe and his team made the most of the occasion by throwing parties at each event that were the envy of the other participants. Joe enjoyed scuba diving, running, cycling, and a shot of whiskey or two. Joe’s life was full of adventure that took him to depths of 200 feet below the waves, 180,000 miles of running; 3,000 in one year, and 150,000 miles of cycling with one 46-day trip across America from L.A. to Boston.

Joe was as open about himself as he was to people who wanted to be part of the team. Joe had an open and direct demeaner about him that might put one off until you understood the depths of his generosity. His giving knew no bounds. You have heard the old cliché, “he would give you the shirt off his back”, you should think of Joe. Joe provided support to every member of his team. He personally is the reason that you see so many triathletes in the Jax and PV beach communities. Joe’s home was the training hub for everyone’s daily ride and run, and his home was open to anyone who needed a shower, the pool, hot tub, or a shot of whiskey. He loved hearing about the progress of their training, and he would provide a tip or two even if unsolicited.

Joe loved his home and was especially fond of the flowers around his property. When Joe’s mother lived with him, he made sure that she had beautiful flowers to look over as he was away at work. He would share a story about how he purchased a larger TV for her to view while he was away only to find out that she chose to never turn the on the TV, but rather stare out over the flowers in the backyard. Her love of flowers was passed to Joe and he was very particular about the flora on his property, just ask the yard people. Again, his generous nature would take over and as people would visit and comment on his beautiful flowers, he would ask one of us, a little later, to dig up a bulb or grab a potted plant and sit on the table so that when the admirer returned, he could share with them what he too adored.

Like many of Joe’s era he loved his country and served in the Army during the Korean conflict. To say he was patriotic would be an understatement. Joe made sure that his flag flew proudly and that all regulations to its display were followed precisely. Joe especially enjoyed listening to military stories with those on the team or with any visitors to his home who had served.

Joe will be laid to rest at The Jacksonville National Cemetery.