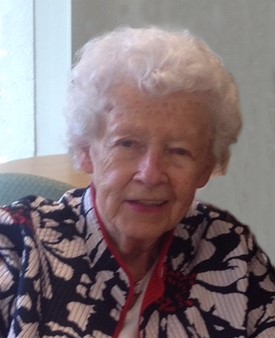 Janet Christensen, ever feisty and fiercely independent, died peacefully on Jan. 16, 2019 in Atlantic Beach, Fla., at the age of 95.  Janet was born September 7, 1923, in Dayton, Ohio, the fifth of six children of Elizabeth and Richard Cull Sr., a well-known local newspaper and radio newsman.

The beloved mother of five had remained in her own home until three months before her death, moving to an assisted-living center as her health declined. Her Irish spirit never flagged, buoyed by the love of her family, which included six grandkids who knew her as “Mamo” and a procession of shamelessly spoiled Shelties.

She and Norbert “Chris” Christensen, a Marine paratrooper in World War II, married in 1950 and raised their family in Dayton. He was a stockbroker and, when her children were mostly grown, she became a real estate agent.  Janet and Chris retired to the Jacksonville area in 1989 and had lived in Atlantic Beach since 1997. They had been married for 57 years when Chris died in 2007. Eight years later, she lost her son, Dr. Richard Christensen of Jacksonville Beach, in a hit-and-run traffic accident.

She is survived by her daughters Kathleen of New York City and Mary Anne of Jacksonville Beach; sons Kim (Christina) of Long Beach, Calif., and Pete of Peachtree City, Ga.; and daughter-in-law Kathy Moeder Christensen of Jacksonville Beach.  “My kids are as good as gold,” she was fond of saying, even when they weren’t.

Her caregivers Debbie McLeod, Doreen Castle and Marlene Watts deserve special thanks for their comfort and companionship.

A Memorial Mass will be celebrated by Rev. William Kelly at 11 a.m. Friday, Jan. 25, at St. Paul's Catholic Church in Jacksonville Beach, where Janet and Mary Anne, her daughter and selfless caregiver, often occupied the front pew on Saturday evening services.

In lieu of flowers, donations may be made to Beaches Habitat for Humanity, 797 Mayport Road, Atlantic Beach, FL 32233  beacheshabitat.org.