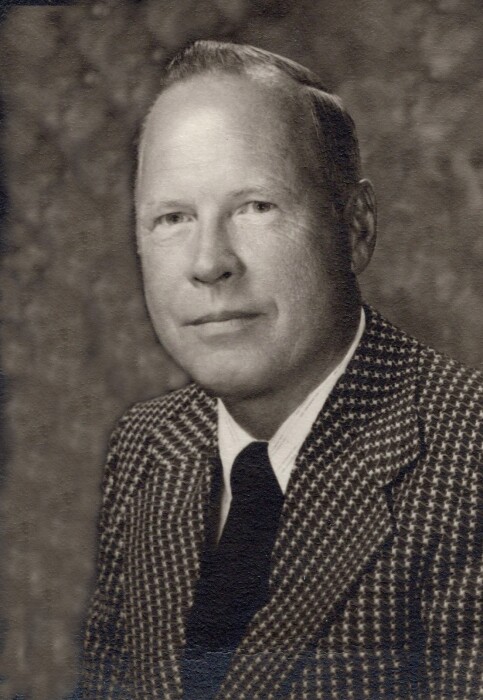 We lost Homer Hull, our beloved father, grandfather and great grandfather on February 4, 2022. He was born October 18, 1926 in Lakeland, Florida, the only child of Homer and Josephine Stroup Hull. After childhood years in Tampa and Plant City, the family moved to Jacksonville. In 1944, Homer graduated from Robert E. Lee High, in absentia, serving in the US Army Air Force. After his service during WWII in Germany, he entered Jacksonville Junior College (now JU) in 1947. Transferring to UF in 1948, he earned a Bachelor of Architecture degree in June 1951.

Homer married Carmel Ann Delk in 1955 at St. Paul’s Catholic Church in Riverside. Together they raised their family in Atlantic Beach until Carmel’s death in 2002. Homer enjoyed fishing, biking and reading. An avid sports fan, he and Carmel enjoyed cheering for local teams, especially the Gators and JU basketball.

He began his professional career after college with a job in NY City in the summer of 1951 with Hershthal & King, Civil Engineers, providing construction documents for the State of NY’s Department of Transportation. From 1952-1956, he was employed in Jacksonville with Jefferson D Powell, Architect, as a draftsman/chief draftsman. From 1956-1961, he was chief draftsman/structural designer for Evans & Hammond Consulting Engineers. After which he moved to Reynolds, Smith and Hills where he was Senior Draftsman, Architect and Senior Project Architect from 1961-1982. Projects there included project architect for Tampa International Airport and resident architect/construction manager for the Florida State Capitol during construction administration phase of the House and Senate Legislative facilities. From 1982-1983, he was employed by Taylor Wolfe Architects and Haas, Lazar, Morales & Shummer. His last career move was to Government Service (DOD) at Naval Station Mayport as architect in the Engineering division of the Public Works Office. This service included two years at Guantanamo Bay, Cuba. Homer was then appointed Station Cultural Resources Manager. He was this station’s representative in the Mayport Waterfront Partnership, The First Coast Metro Planning Organization and Jacksonville Transit Authority Public Advisory committees.

Homer is survived by his children, Mary (Bert), Homer III or Buddy and John (Cindy); as well as grandchildren, Matthew Theis, Jill (Ryan) Hayes; and great grandchildren, Jackson and James. Always in his heart was his beloved and first grandchild, Laura Hull, who passed away in 2011.

The Graveside Service for Homer will be 2:00 p.m. Friday, February 25, 2022 at Jacksonville National Cemetery. Donations may be made to Community Hospice of NE Florida.