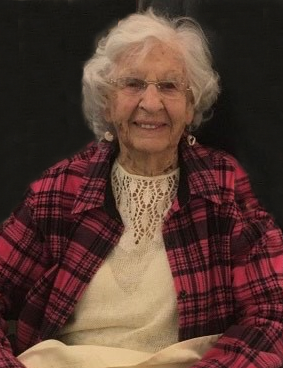 Helen Joan Grabowski Grant left this earth after 99 years on April 29, 2021. She was born on March 30, 1922 in East Orange, New Jersey. One of four, Helen attended Our Lady of the Valley Catholic School. A first-generation American, Helen never forgot and always appreciated how hard she and everyone around her had to work and how much everything in this country meant to them. When her father died young, she stepped up to run the household while her mother went to work to support the family.

Helen met Ed when his band was playing at a local music hall and it wasn’t long before he proposed one cold night, going down on one knee when they were ice skating. They married in 1942 and Helen held down the home front while Ed served his country. They welcomed their first child, Eddie, during the war, and the rest followed once Ed had returned to civilian life. While Ed rode the elevator to the top, Helen raised their six children, first in Levittown, Long Island and eventually in suburban New Jersey. While they lived in several towns in New Jersey throughout the years, she always had a particular fondness for Clinton, tucked away in Hunterdon County. Family life often meant a house full of Ed and Helen’s brothers and sisters and spouses along with nieces, nephews, and friends. Helen and Ed loved to entertain, something they carried with them all their lives. When Ed retired in 1983, he and Helen pulled up stakes in the cold north and pointed toward Atlantic Beach, Florida, an area they fell in love with after their son, Rob, moved there. Helen took to the beach life. There wasn’t a summer that went by that her skin wasn’t a deep brown from hours spent at the ocean – much to the chagrin of her pale Irish husband. Every morning, coffee and towels were gathered and a trek was made the two blocks to the beach, where they would spend hours greeting friends and enjoying the ocean. It was at the beach that they shared twenty years together before Ed’s passing. Helen moved to Cypress Village Retirement Community after that, where she became so active that calls to her apartment often caught her on the way out the door, heading to a game of mahjong, an exercise class, lunch with friends or any of the dozens of other activities she took part in during the last decade and a half of her life. Helen will be remembered for a lot of things. We will remember the singalongs and song sheets. The weekly meal of spaghetti and meatballs. Sitting with her at the piano and picking out Heart and Soul. Her pride in her Polish heritage. Her sense of humor and how light on her feet she was when she danced. Her love for playing the organ at Saturday night mass. And above all, strong and fiercely protective of her family. However, and perhaps most strikingly, Helen will be remembered for her kindness. There was always room for another at the table. Plenty of food to go around. A glass of water for a stranger. A helping hand. Whether for her family or friends or simply someone who needed help, Helen always welcomed them. And isn’t that the best most of us could ask for, to be remembered for our capacity for kindness?

Her service will be held Monday, May 3, 2021, at 12:00 p.m. in St. Paul's Catholic Church with burial to follow at H. Warren Smith Cemetery. In lieu of flowers, the family requests that donations be made to the Beaches St. Vincent DePaul Society, http://bit.ly/HelenGrantMemorial.