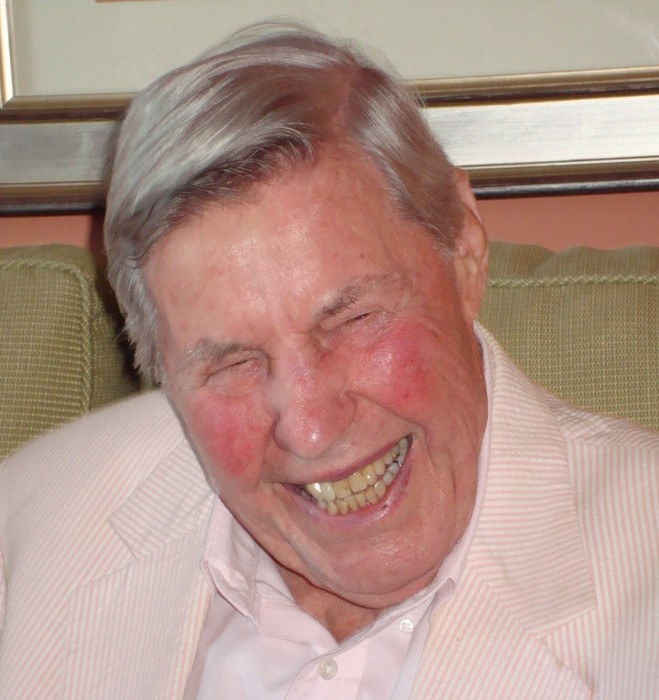 H. John ‘Jack’ Badenhoop, passed away peacefully at age 100 on February 15, 2019 in Ponte Vedra Beach, FL. Born August 28, 1918, in Elmira, NY,  he grew up in Baltimore, MD, sailing and racing small boats on his beloved Severn River and the Chesapeake Bay. He graduated with a BS from the University of Maryland in 1940, playing on two national championship lacrosse teams.

On February 1, 1941, Jack met and fell in love with Martha, and they married on July 5, that year. They spent 63 years together, raising 3 children, sailing, boating, and traveling the world together, until Martha passed away March 7 , 2004.

From 1940 to 1945, Jack served in the Army in World War II, as a commissioned officer rising to the rank of Lt. Colonel. In July of 1944, he was with the 656th Tank Destroyer Battalion when they arrived on Omaha Beach in Normandy, and worked their way towards Belgium and into Germany. Jack received a Bronze Star and a Presidential Citation for his actions and leadership on March 7, 1945, when the 656th crossed the Rhine River at Remagen, Germany under heavy resistance from the German Army. Eisenhower was quoted as saying taking the Bridge at Remagen was worth its weight in gold and shortened the war by months. Jack worked throughout his career in the insurance industry, including a few years in the Ponte Vedra Beach area in the 1950’s, then moving to St. Paul, MN and working as an executive at The St. Paul Companies. After retirement he and Martha moved back to Ponte Vedra Beach. A lifelong sailor, he taught many the art of sailing. He once served as Commodore of the Apostle Islands Yacht Club. When he left sailing to stern, he and Martha sold the sailboat and bought a trawler, the Tomorrow. They spent many years cruising the Intracoastal Waterway, traveling up and down the East Coast, venturing all the way to Lake Superior and the Apostle Islands. Jack took up tennis in Ponte Vedra and played until age 91. His last known sports championship was on the bocce ball court at Vicars in 2007. In 2005 - 2007, he served as President of Vicar’s Landing’s  Members’ Council.

The family requests no flowers and invites donations in Jack’s name to go to the Vicar’s Landing Scholarship Fund, 1000 Vicars Landing Way, Ponte Vedra Beach, FL 32082.  A celebration of life on March 7 will be private.