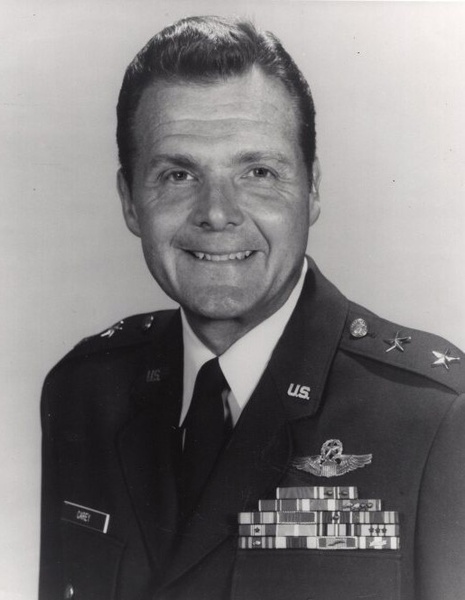 Major General (USAF Ret.) Gerald J. Carey, Jr., 91, of Atlantic Beach, FL, passed peacefully to heaven on January 8, 2022.  Jerry was preceded in death by his beloved wife of 64 years, Joan B. Carey, and is survived by children G. John Carey, III (Ann) of Jacksonville, FL, Cathleen Carey Corgan of Tampa, FL, J. Kevin Carey of Tampa, FL, and Daniel Carey (Kimberly) of Seattle, WA.  He is also survived by 10 grandchildren and 5 great-grandchildren.
Jerry was born on October 1, 1930, in Brooklyn, New York.  His father was a longstanding Asst Attorney General of New York State.  Jerry attended Brooklyn Prep (Jesuit) High School and thereafter attended the United States Military Academy at West Point. Upon graduation in 1952, he entered the United States Air Force where he served with great distinction over a 29-year career until his retirement in 1981.  His educational background included a Bachelor of Science from West Point; Bachelor of Science, Aeronautical Engineering, U.S.A.F. Institute of Technology (1958); Master of Science, Aeronautical Engineering Texas A & M University (1963), and he was a Distinguished Graduate of the Industrial College of the Armed Forces (1973).
Among the highlights of Jerry's Air Force career were his service as Wing Commander, First Tactical Fighter Wing at MacDill Air Force Base (Tampa, FL, 1974-1975) and Commander, U.S.A.F. Tactical Air Warfare Center, Eglin AFB (Ft. Walton Beach, FL 1978-1981).  Earlier in his career, he served as an Assistant Air Attache at the U.S. Embassy in Tokyo, Japan (1958-1961) and Flight Commander and Operations Officer with the 336th Tactical Fighter Squadron, Fourth Tactical Fighter Wing, Seymour Johnson Air Force Base (Goldsboro, N.C. 1967-1969).  During the Viet Nam War, Jerry flew 163 combat missions while stationed at Udorn Royal Thai AFB as Operations Officer for the 555th Tactical Fighter Squadron (1969-1970), flying the F-4 Phantom.  He later flew the F-15 and F-16 fighter jets.  His military decorations and awards include the Distinguished Service Medal, Legion of Merit, Distinguished Flying Cross with two Oak Leaf Clusters, Bronze Star, Meritorious Service Medal, Air Medal with 13 Oak Leaf Clusters, and the Air Force Commendation Medal.
After Jerry's retirement from the Air Force, he served as Associate Director and Principal Research Engineer, Georgia Tech Research Institute (Atlanta, GA 1981-1993). He also consulted for Loral Industries in the area of electronic warfare.
Well beyond Jerry's career accomplishments, his four children remember him as a loving and devoted husband and father. His kindness and integrity provided his family, colleagues, and friends with the finest example of how one should live and treat others.  While a warrior, his was of the kindest and gentlest spirits.  It was never about him, but about the problem at hand, the mission, and how he could help in any way possible.  His strong Catholic faith was lived out daily in quiet and humble acts without fanfare, but with lasting impact.  Those who worked with him or for him felt a loyalty and respect that only a life of selfless service to faith, family, and country could inspire.  As many have said during his life, "They just don't make many men like him."  We are comforted knowing in faith that he is with the Lord and again with his beloved Joan.
The family's heartfelt thanks go out to the staff at Fleet Landing Leeward Manor Assisted Living for their loving and professional care over the last 6 years.
A visitation will be held on Thursday, January 13, 2022 from 5:00 to 7:00 PM, at Quinn-Shalz Family Funeral Home, 3600 3rd Street S, Jacksonville Beach, FL.  A funeral mass will be held at 11:00 AM on Friday, January 14, 2022 at St. John the Baptist Catholic Church, 2400 Mayport Road, Atlantic Beach, FL.  A reception will follow in the church hall.  An interment service will be held at Arlington National Cemetery on a future date, with details released when available.
In lieu of flowers, donations may be made in Maj. Gen. Carey's honor to the Wounded Warrior Project (https://www.woundedwarriorproject.org/) and to Covenant House, a Catholic charity focused on youth homelessness (https://www.covenanthouse.org).