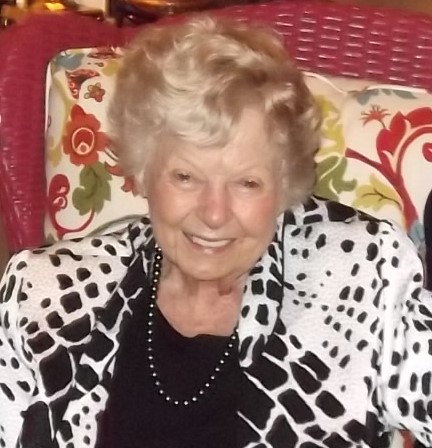 Georganna Stephens of Ponte Vedra died April 9, 2019 with her son and daughter-in-law at her side.

She was the first of three children of John and Eva Schumacher, born February 14, 1927 in Seymour, Illinois.

She graduated from Bedford Indiana High School, married her high school sweetheart and gave birth to her only son.

She worked as a switchboard operator in Bedford, a medical secretary in Bloomington, Indiana and was the executive secretary of a steel company president in Chicago.  Interviewed by Studs Turkel she was immortalized in one of his books. After the death of her husband and three years after her son graduated from high school, she married Orren Leslie.  Shortly after the marriage they moved to St. Catharines, Ontario where she maintained a home for Orren and his three children from a previous marriage.  She also did volunteer work for the Maycourt of Canada School for crippled children, the Red Cross of Hamilton, Canada as well as the Art Center of St. Catharines.

They retired to Innisbrook in Palm Harbor, Florida where she organized fund raising events for hospice and was a hospice volunteer.  She continued to live at Innisbrook after Orren’s death.

She married fellow Innisbrook resident Harry Sutton.  They lived in Tarpon Woods, traveled the world until his death when she moved back to Innisbrook.

While on a cruise in Europe she met Malcom Stephens of St Augustine, Florida.  They eventually married and moved to Ponte Vedra after a brief time in St Augustine.  They became members of Vicar’s Landing on February 25, 2009.  After Malcolm’s death she lived at The Stratford until her recent death.

She is survived by her son Terry R. Bivins and his wife Lyn of Chicago, Illinois; brother David Schumacher of Lancaster, Pennsylvania and his family; and sister Kathleen Combs, of Owensberg, Indiana and her large family.

From the Leslie family she is survived by Margaret Leslie Withall and her husband Gary of Wayne, Illinois as well as their two children and two grandchildren.

She is also survived by her stepdaughter Nancy Sutton Scott and her husband Ron of Holmes Beach, Florida.

From the Stephens family, she is survived by Susan Conway and her husband David of Houston, Texas and their two children. Malcolm Stephens III and his wife Audrey and their daughter of St. Augustine, Florida; as well as Lisa Stephens of Bath, Massachusetts and her son.

She was a member of Trinity Episcopal Parish in St. Augustine and Christ Church in Ponte Vedra.

Donations in her memory may be made to:  Vicar’s Employee Scholarship Fund.  Payments should be made to “Vicar’s Member’s Trust” and mailed to 1000 Vicar’s Landing Way, Ponte Vedra Beach, FL 32082 or “Development” Mayo Clinic, 4500 San Pablo Road, Jacksonville, FL 32224.  In the memo state “Kidney Disease Research.”