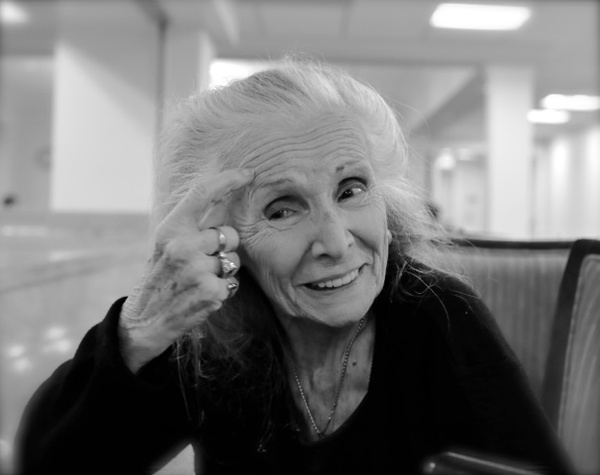 Genevieve R. Griffin, neé Rouby, was born January 5, 1928, in Tunis, Tunisia, where her parents ran a school for the children of French ex-patriots. She enjoyed growing up in Tunisia, and considered herself more of an ex-pat “Pied Noir” than “French.” She loved to regale everyone with tales of her youth in the French colony, often sharing photos of the desert oasis and Roman-era pool where she and her friends swam and picnicked.

Living in North Africa in the thirties and forties, she had a front-row seat to World War II. Her family home was commandeered twice, first by German officers with incoming Panzer divisions, and later by Italian officers as the Axis Powers left Tunisia. She swore up and down that she and a girlfriend once dove off and swam under the bow of a French naval ship in the Tunis harbor, much to the consternation of the ship’s astonished crew.

Genevieve (that’s “Zhun’ vee-ev”) learned English, and spoke it better than many native speakers, in London after the war. By the mid-1950s, she was in America teaching French at a private school in New Jersey. The bus driver for the school set her up on a blind date with Max Griffin of Clinton, NJ. She married Max two months later, and the two had a daughter the following year.

Genevieve handily managed the Griffin household of three humans and various threesomes of cats, and successfully planned and executed numerous relocations along the East Coast, in Pennsylvania, and in Texas.

Genevieve was an avid reader (biographies, politics, top fiction), loved to engage in spirited conversations with intelligent people, and had a vividly green thumb (day and tiger lilies were among her favorite flowers). She also had an artist’s eye with fashion and food, and was known for her style.

In 1996, Genevieve and Max retired to a quiet life of puttering around the house and garden in Jacksonville. Over the years, they took a number of trips to Europe to visit her relatives and friends, and explore new places. Max’s death in 2015 marked Genevieve’s entry into Clare Bridge — Brookdale Southside.

A lifelong animal lover, she was sad to not be able to keep a cat or a dog at Clare Bridge. So she very much enjoyed visits from the therapy dogs and especially the therapy cat with Community Hospice and Palliative Care. She even has a starring role in the professional video promoting the Community Hospice pet therapy program (spoiler: she steals the show).

Genevieve was a strikingly beautiful, tough and intelligent woman who could be extremely funny when the mood struck. She certainly kept the staff at Clare Bridge on their toes, but was also able to make them laugh out loud. You really could call her a force of nature. For much of her time there, Genevieve was the undisputed Queen of Clare Bridge — regularly firing and re-hiring staff based on whether or not they pleased her that day. Her wit, fierce spirit and unfading beauty will genuinely be missed. As will the many funny compliments she dished out. If you had great teeth or clear skin, you were sure to hear about it from her.

Genevieve’s daughter sincerely thanks the nurses and care staff at Clare Bridge — Brookdale Southside and the wonderful visiting team from Community Hospice for all of the time, energy, patience and love they shared with Genevieve. It was a long and arduous journey, but it had its lighter moments, too. And as fiery as she was, at the end, Genevieve was able to make her transition in deep peace. She was laid to rest next to Max in a private ceremony at the beautiful Prairie Creek Conservation Cemetery.

For those wishing to honor Genevieve’s spirit, making a donation to Community Hospice and Palliative Care, Prairie Creek Conservation Cemetery, or to a no-kill animal shelter like Best Friends Animal Society would be an excellent way to do it. (You could also feed your leftovers to the raccoons. Genevieve and Max loved to do that.)