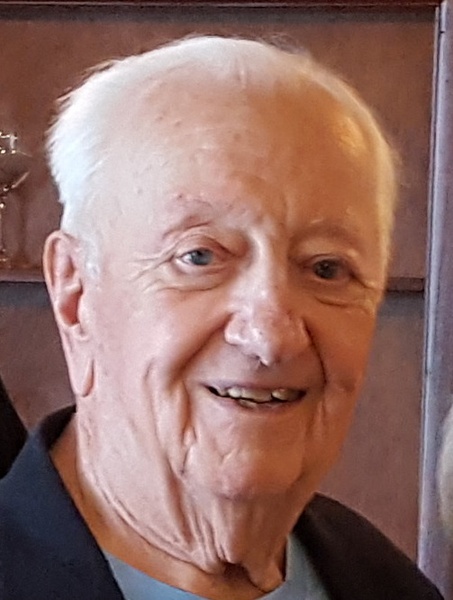 Born in the Westview neighborhood in Pittsburgh, PA in 1925, he lost his dad, Michael, when he was just 4 years old. He and his three siblings Michael (deceased), Pauline (deceased) and Albert were raised during the Great Depression by his Mom Pauline (Woltz) Ebitz.

Frank was a WWII Veteran who proudly served in the U.S. Air Force as a bombardier on a B-24 Liberator bomber.

Frank attended the University of Pittsburgh and W & J University earning his degree in Petroleum Engineering. He was employed by Exxon for 28 years, retiring in 1987. Pryor to moving to Jacksonville he resided in Charlotte, NC where he attended St. Gabriel Catholic Church and was active in the Men’s Club.

His passions were his family and all levels of Pittsburgh sports. Frank enjoyed bowling, fishing and golf which was a major passion where he attained 4 (not a typo) hole in ones after he retired. He played golf regularly until the age of 90. Frank enjoyed many trips with Evelyn to Cherokee, NC along with their caring friends.

Frank will be missed by his beloved wife, his children, grandchildren and friends. I love you Dear!  We love you Dad and Grandpap! Rest in Peace.

There will be a Memorial Mass on August 21 at St. Paul's Catholic Church in Jacksonville Beach at 11:00 a.m.