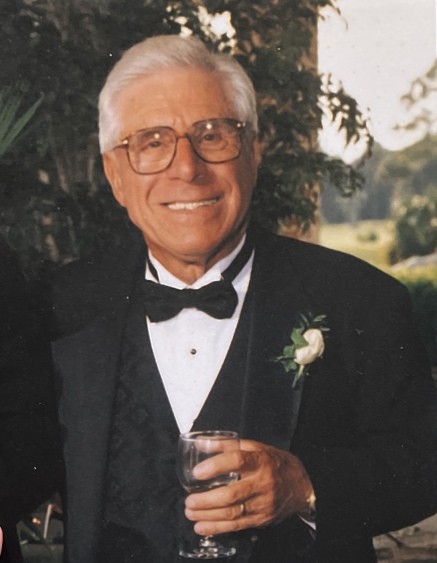 Ed Barbarito, age 93, passed away peacefully on February 7, 2022 surrounded by his family. Born in New Haven, Connecticut to Nicholas and Mary Barbarito, the ninth of ten children. He graduated from Hillhouse High, where he was inducted into their Athletic Hall of Fame. After High School he was recruited to play baseball at Michigan State with his good friend Robin Roberts.

Ed came to Jacksonville Beach in 1957 as a baseball player for the Jacksonville Braves. After suffering a broken ankle, he had to give up the game he loved. He retired from the game, after playing ten years professionally, with a lifetime batting average of .313. Little did he know he was to find his true love Dorothy Schill; they married within three months and made the Beaches their forever home. His second career in the car business brought him to North Florida Lincoln Mercury where he was the General Manager for thirty-five years. He had a tremendous work ethic, none of his children can ever recall him missing a single day of work.

This same tough attitude carried over into his retirement. Where he always started his day with a morning walk down Selva Marina Drive, followed by a game of golf at the Selva Club, a tuna sub at Angie’s, and dinner at Al’s Pizza. Ed was an exacting man as many servers and bartenders can attest all along the beaches. He was a fixture wherever he went, often returning to the exact same seat at any given restaurant.

His dependability was something his family of five children came to rely on and appreciate. They just don’t make them like Ed anymore. His 26 grandchildren all remember fondly the fierce hugs, his encouragement towards excellence and education. Ever the salesman, Ed rarely forgot a face or a name and was sure to know more than a few people wherever he went along the beaches. He even caught notoriety with those he did not know for his eye grabbing T.V. commercials for the Lincoln dealership. He was known to only need one take when shooting a commercial. Visiting people in their homes with his slogans, confidence, and charisma. Ed was known for many a one liner and his kids could quote him on several subjects. His words will continue to ring in their ears long after he’s gone.  Ed had a keen eye for beauty and excellence and would not mince words with his true opinion. This garnered respect for his compliments, as you knew, if he told you then it really meant something.

Ed is survived by his princess and beloved bride of 63 years, Dorothy Schill Barbarito, their five children: Laura B. Miller (Richard), Eddie Barbarito Jr. (Lisa), Donna B. Williams (Chris), John Barbarito (June), and Liz B. Hamrick (Scott) of Pensacola. Ed’s true legacy lies in not only in his famous one liners, or his dependability as a father, but in his surviving children, his 26 grandchildren, and his 10 great grandchildren. He had a great love for babies and children that has clearly been passed on. His grandchildren including, Hampton, Savannah, Delanie, Spencer, Lydia, Angelica, Dominic, Mary Grace, Joseph, Karla, Eddie III, Mikey, Timmy, Kaleigh, Warren, Monica, Colette, John Paul, Grant, Brian, Celine, Alicia, Alana, Emma Leigh, Mack, Jackson will all miss him greatly, along with his great grandchildren: Emma Jane, Hayden, Minkee, Ari, Gianna, Leonardo, Maximus, Luca, Scarlett, and Penelope. Ed’s memory and legacy will live on.

Ed was a devout Catholic and the Funeral Mass will be held at St. John the Baptist Catholic Church, 2400 Mayport Road, Atlantic Beach, Florida on Tuesday, February 22, 2022 at 11am with a reception to follow in the church hall. There will be a visitation with a rosary said for Ed at St. John the Baptist Catholic Church on Monday, February 21, 2022 from 6-8pm. We hope you will say a prayer for Ed in remembrance, preferably a Hail Mary.

In Lieu of flowers please donate to St. John the Baptist Catholic Church.