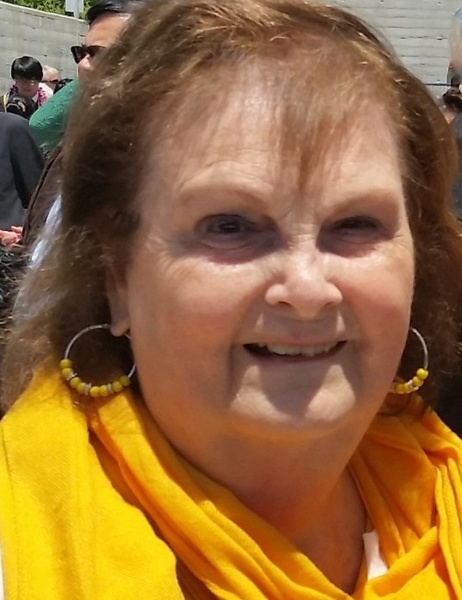 Edna Gayle Leininger passed into her Heavenly home on February 24, 2020. She was born August 27, 1940 at Maxwell Air Force Base in Montgomery, AL.
In her early years, she moved with her family as they traveled between military bases.  One of the most memorable and impactful moves was to Wiesbaden, Germany.  Gayle’s father was involved in the Marshall Plan to rebuild Germany after World War II. Gayle and her family were the first US civilians to land on German soil after the war ended.  The picture of her family made the NY Times front page and she has displayed the article proudly over the years.  Gayle recounted that she had lived in over 30 places in her life.
Gayle had two callings:  one was motherhood and the other was her English as a Second Language (ESL) ministry.  Gayle was blessed with two sons, Mark and Jeff and four grandsons, Ryan, Cole, Cameron, and Hunter.  As you can imagine, life was always full of practical jokes and laughter.  She was fondly called “Mimi” by her family and friends.
Gayle began her journey with ESL during her stay in Anchorage, Alaska.  In 1967, she started an ESL ministry with just one student at First Baptist Church in Orlando, FL.  This ministry became the largest ESL ministry in the Southern Baptist Convention and resulted in a new Spanish speaking church.    She served as the Literacy Missions Consultant for the Florida Baptist Convention and was a National Missionary through the Church and Community Ministries Unit of the North American Missions Board. One of her most memorable journeys was her mission trip to China as reflected in the precious items she displayed so proudly. She taught ESL, spoke at conferences, and served as a consultant until she retired.
Gayle is survived by her husband, Marston “Vic” Leininger; sister, Julia (“Judy”) Seidl; sons, Mark Leininger (Kendra) and Jeff Leininger (Shauna); Mark’s sons, Ryan and Cole (mother Cindy); Jeff’s sons, Cameron and Hunter (mother Melissa); and her nephews and niece. She is preceded in death by her father, Joseph J. Jordan (“JJ”) and her mother, Jimmie B. Jordan.
The family will gather for a Celebration of Life on Sunday, March 15, 2020 from 2-4 p.m. at the home of Mark Leininger located at 1721 Oakbreeze Lane, Jacksonville Beach, FL.  If you are able to attend, please bring pictures and stories to share as we rejoice in Gayle’s impact and lasting legacy. True to her calling, Gayle desired that in lieu of flowers, donations would be made to the Lillian Isaacs Endowment for Literacy Missions, WMU Foundation, Birmingham, AL.