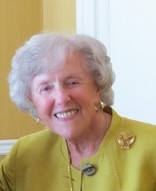 In 1948 she married Eugene F. Calafato. They lived both in the states and overseas with Gene’s career as an officer in the USAF, and they retired in La Jolla, California. In her later years, she remarried to Daniel H. Stinemates, a retired Naval officer of La Jolla, California. Edith moved to Jacksonville, Florida in 2014 to be near her oldest daughter. Edith was a kind and gentle person who made a loving home for her family. From the Brownies and Girl Scouts when her daughters were young, to becoming a hospital and Hospice volunteer later in life, she taught her family by example to serve others.

A Mass of Christian Burial will be celebrated at 9:00AM, Monday, November 12, 2018 in Mary Star of the Sea Catholic Church, La Jolla California with interment following at Fort Rosecrans National Cemetery.