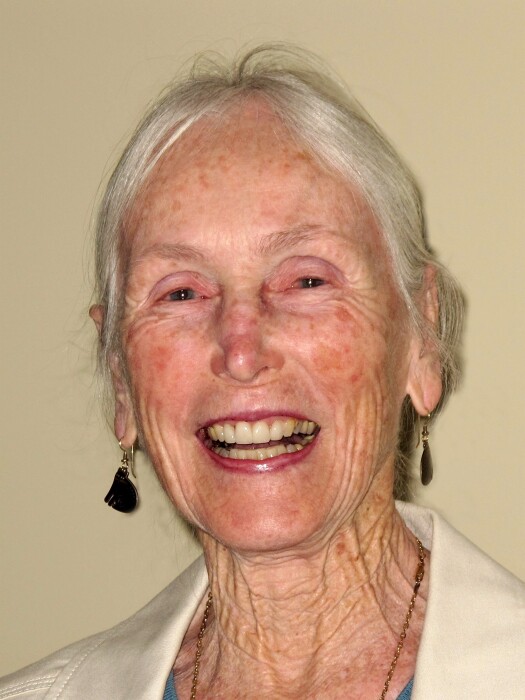 Edith Gillespie passed away on July 28, 2021. She was born in Wenatchee, Washington on September 18, 1933. She grew up in Twin Falls, Idaho. She moved to Glenmoor at World Golf Village in St. Augustine from Long Beach, CA in 2008 with her friend Justin Pipkorn.
Edith is survived by her sister Dr. Janet Titus and nephew Stephen Craig Titus of Green Valley, AZ. She is predeceased by her parents, Dr. Arzie David Gillespie and Florence Irene Russell and niece Sidney Ellen Titus.
Growing up in Idaho, Edith enjoyed riding her horse in the local canyon, sometimes with her father from whom she developed her interest in horses. In summer, she swam and was a competent swimmer. Winter brought the opportunity to ski at Sun Valley. She earned enough money to buy her first dog and had pets for most of her life. She graduated from Northwestern University and took her first job working for the YMCA. Her proud achievement was to develop a girl’s water ballet team. Desiring to increase her skills, she took time out to add a Master’s Degree in Education from the University of Minnesota. Next, attending Tufts University she obtained Certification as an Occupational Therapist. Southern Cal was her next home where she applied her talents at several Los Angeles hospitals, finally settling at Rancho Los Amigos Hospital. For 31 years, she was involved in teaching and supervision as well as patient treatment.
Edith met Justin when both lived in Manhattan Beach, CA. They found a common interest in skiing and photography. Edith introduced Justin to pets and Justin taught her to sail. They built two wooden kayaks and took a number of trips in California, Mexico and Canada. As a mutual retirement project they built a trailerable sailboat and cruised California, Canada, Michigan and finally Florida. They were friends for 52 years.
In accordance with Edith’s wishes, a family gathering will take place at a later date. Westminster St. Augustine, where Edith last lived, honored Edith with a memorial rose.