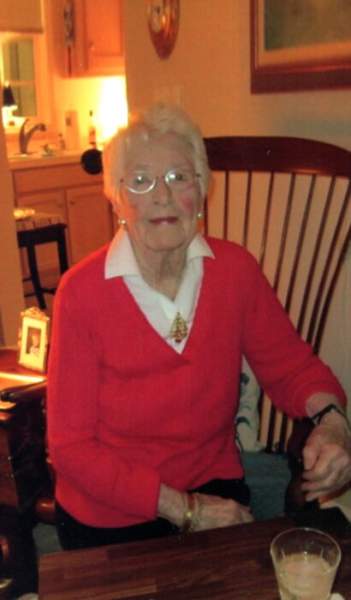 Dorothy Voss, 107, passed away peacefully on September 27, 2021. She was born February 16, 1914, in New York City, NY to Helene and Henry D. Trieper, Jr. She attended Packard Business School and joined Standard Oil of New Jersey, in 1932, where she met her husband, Edward G. Voss, of Jersey City, New Jersey. They married  in 1940 and spent 67 happy years together.

The Vosses spent the early years of their marriage in New Jersey and then California with the Arabian American Oil Company (Aramco). In 1949, they returned to the east coast to Scarsdale, New York. Edward was named Treasurer of Aramco in 1952, and in 1961 they moved on to Dhahran, Saudi Arabia.

While living in Dhahran, Dorothy volunteered in the hospital burn group through the Women's Exchange, and enjoyed portrait painting, bridge, music, as well as many opportunities to travel and explore the Middle East, Europe, Asia and Africa.

Upon retirement in 1973, the Vosses settled in Owls Head, on the coast of Maine. They spent countless hours restoring their 150-year-old house and tending to their plantings and gardens on their property. Dorothy continued to paint, winning several awards for her still life and landscape portrayals of the Maine coast. She continued to play bridge and served as a volunteer in the gift shop at the Penobscot Bay Medical Center for 28 years. Her gift shop window displays were known and appreciated by the entire hospital community. Following the death of her husband, Dorothy moved to St. Augustine, Florida, gathering many new friends in the final 13 years of her life.

Services will be private at the convenience of the family. Contributions in memory of Dorothy Voss may be made to