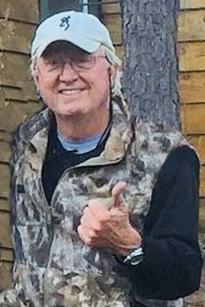 Anyone who knew Dick would tell you he enjoyed a good party surrounded by family and friends.  He had the gift of storytelling, and could captivate those around him with a animated tale of his latest adventure.

As a young adult, he spent many early mornings on the rivers and creeks of South Carolina duck hunting and fishing with friends.  Sometimes that friend may only have been one of his dogs, but that was okay with him.  He found them great company!  Dick loved everything about the outdoors - the mountains, the woods, the ocean.  He grew up surfing the shores of Pawley’s Island and the South Carolina coastline, and instilled the love of surfing in his youngest son Matt.  They could often be found looking for that perfect wave at the North Jetties.

Dick graduated from Kingstree High School in 1970 and attended Anderson College & the University of South Carolina, graduating in 1974 with a double major in political science and history.    He worked in Kingstree, South Carolina before moving to Jacksonville, Florida where he met Donna, his wife of 37 years.  Together they raised two sons, Jack and Matt.  Dick’s greatest joy was watching his sons grow and spending time together as a family.

At Dick’s request, there will not be a formal funeral or memorial service at this time.   Donations can be made to Community Hospice Anne & Donald McGraw Center for Caring.