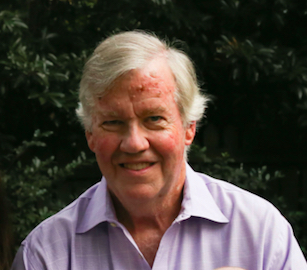 David Hugh Stovall, Jr, of Charlotte, North Carolina and Ponte Vedra Beach, Florida, passed away peacefully August 23, 2018. He was married to the love of his life, his high school sweetheart Debbie, for 47 years. He had countless friends, put family first, was an amazing and loving husband and father, and was a stellar grandfather.

Dave had a long and successful career in the retail business, from early days working for his father at Leggett, followed by time at Woodward & Lothrop and Bloomingdale’s in the Washington area. He came to Charlotte where he spent 23 years at Belk, ultimately serving as the chairman of the Central Division.

Dave served as the chairman of the Charlotte Chamber of Commerce in 1993 and worked with the team that helped bring the Carolina Panthers to Charlotte. He served on the board of the Williams School of Commerce, Economics, & Politics at Washington and Lee, and devoted time to many other causes in Charlotte, including the Arts and Science Council, the United Way and Rotary Club.

After retiring from Belk, he took on the role of CEO at Jacksonville, Florida-based Stein Mart, where he led the company to have one of the highest performing publicly-traded stocks during his tenure. In Jacksonville, he served on the boards of Baptist Health and the Federal Reserve Bank of Atlanta's Jacksonville branch.

Despite all of his business success, perhaps his crowning achievement was in his role as “Granddaddy” to Perry, Ridge, Scottie, and George. Dave and Debbie were blessed with the arrival of 4 grandchildren in 4 years, with a fifth due in September. Granddaddy lit up in the presence of his grandchildren and was able to spend a great deal of special time with them before he passed.

Dave is survived by his wife, Debbie and his children and grandchildren: Courtney Stovall Gentzel and husband Brett (Perry, 4, Ridge, 2, and Scottie, 2 months); David Hugh Stovall III; and Nathan Woodroof Stovall and wife Gillian (George, 1, and new baby due September 7).

A Memorial Service will be held Thursday, August 30 at 2 p.m. at Christ Episcopal Church in Charlotte, North Carolina.

In lieu of flowers, please consider honoring his legacy with a memorial contribution to a charity of your choice or to the Stovall Family Endowment at Washington and Lee University that Dave created. The endowment provides unrestricted support for the faculty, students and programs of the Williams School of Commerce, Economics, & Politics. Contributions may be mailed to Washington and Lee University, Office of Development, 204 W. Washington Street, Lexington, VA 24450.