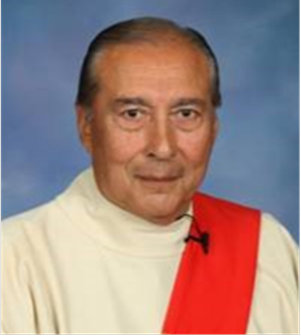 Dan was born in Morristown, NJ to Daniel Scrone, Sr. and Fay DiGangi Scrone on August 17, 1939. He graduated from Bayley-Ellard Catholic High School in June 1956. He attended St. Charles Borremeo Minor Seminary from 1956-1957. He joined the US Marine Corps in January 1958 and was honorably discharged in January 1961. His Marine Corps duties consisted of Military & Security Police at the Naval Air Station in Quonset Pt., Rhode Island. Upon discharge from the Marines, he attended St. Mary’s College, in St. Mary, KY and then onto Seton Hall University in South Orange, NJ. He received a B.A. in Philosophy from St. Mary’s College in 1963. From September 1963 to June 1965, Dan taught 7th & 8th grade at St. Patrick’s Parish School in Chatham, NJ while attending night school and studying for a master’s in Philosophy. [He amassed 18 credits] at Seton Hall.

Dan was ordained a Deacon in the Paterson Diocese on March 27, 1982, by Bishop Frank Rodimer (Ret.). Besides working in various parishes, he was Spiritual Director for Cursillo for 5 years. From 1999 to 2005 he taught Religious Education to high school seniors at Bayley-Ellard High School (his alma mater) and was appointed President of the High School by Bishop Rodimer in 2003. Dan retired from the business world at Computer Horizons Corp, as a corporate Vice President in charge of sales in 1996.

Dan and his wife Peggy moved from Morris Plains, NJ in November 2007 to Ponte Vedra Beach. He was granted faculties by Bishop Victor Galeone in February 2008 to serve the people of Our Lady Star of the Sea Parish and teach religion at Palmer Catholic Academy.

Dan leaves behind a wonderful legacy as a faithful servant of the Lord, loving family and educator.

The family wishes to extend their gratitude to Dr. Jose Nieto, Jay Anderson and The Baptist South Hospital team, Community Hospice, Sr. Joan Gabbin and Mayo Clinic and Our Lady Star of the Sea Parish community.