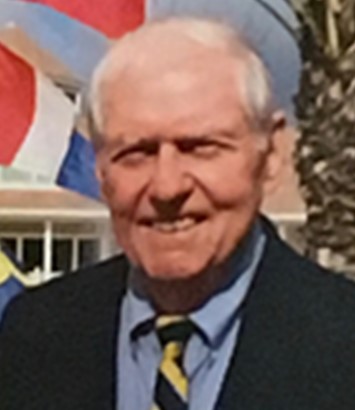 Dan was born in Uniontown, PA, February 11, 1929 to Morgan Bowman MacDonald and Ruth Newcombe Greene MacDonald.  He grew up with four siblings and is survived by his elder brother, Morgan MacDonald.

Dan attended High School at St. Andrew’s in Middletown, DE, and graduated with a BA in Psychology from Yale University in 1951. Afterward, he served honorably in the United States Army as a Lieutenant in Basic Training at the Indiantown Gap, PA army base, preparing young soldiers to fight overseas in the Korean War.

Dan was a dedicated husband and loving and supportive father.  He was extremely active in local politics, wherever he lived. He served as Clerk, then Mayor, of Baxter Estates in Port Washington, NY, and brought his political acumen to his new community when he and his wife Adele (Van) moved to Ponte Vedra Beach 25 years ago.  Dan was an officer in the St. Johns County Roundtable, a founding member of the Ponte Vedra Beaches Coalition, a member of Marsh Landing Homeowners Board of Directors, and Sawgrass Players Club Board of Directors.  He was Vicar’s Landing Resident Director for five years, during a very active time of renovation and capital improvement.

Dan contributed his lifetime of business, human understanding and wisdom generously to his community in all his civic endeavors.  He saw his role as Elder and statesman, kept his eye on the big picture, and sought to guide government and business decisions to benefit the long-term wellbeing of the community.

Dan was a salesman and broker in the fine paper industry all of his working life. He began his career with Westvaco, moved to St. Regis, then became co-owner of Century Paper.

Dan was an avid sportsman and an ultimate project creator.  He rowed on the crew team at St. Andrew’s and Yale, where they beat Harvard.  He was an avid golfer until the last year of his life.  He hunted deer, quail and turkeys.  He sailed and fished at Manhassett Bay Yacht Club in Port Washington, NY, always up at dawn for bluefish and stripers.

Dan is revered by family and friends as a person of uncompromising integrity, slow to judge, but once galvanized, determined to take action.  He was irreverently funny, a guiding principal in all his affairs, a trustworthy advisor, and a generous patriarch.  We will all miss him deeply.

In lieu of flowers, donations may be made to: The Vicar’s Landing Members Trust Scholarship Fund: vicarsmemberstrust@gmail.com, or Community Hospice and Palliative Care Foundation, 4266 Sunbeam Rd. Jacksonville, FL 32257, www.communityhospice.com/give.