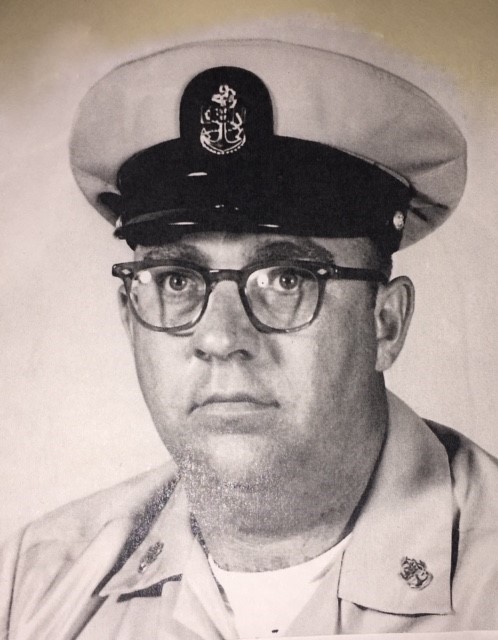 Charles H. Dupraw, age 87, of Atlantic Beach Florida, passed away peacefully on May 24, 2019 at the Clyde E. Lassen Veterans Nursing home in St. Augustine, Florida where he received excellent care for the last 5 years.
Charles was born on December 15, 1931, to Charles and Elizabeth Dupraw in Lake Placid, New York.
Charles loved hunting, fishing and was a scratch golfer.  In high school he was a star football and baseball player.  He tried out for the Brooklyn Dodgers in 1951 along with Johnny Padres. Charles was not chosen because he wore glasses.  Johnny Padres went on to be a winning pitcher in the 1955 World Series.  Charles was the golf club champion in Patuxent River, MD in 1971.
Upon graduation of Lake Placid High School, he enlisted into the U.S. Navy.  He was an aviation electrician.  He served during the Berlin Airlift, Korean War, Vietnam War also during the Cuban Missile Crisis. He served aboard the USS Franklin D. Roosevelt during the Vietnam War.  He was stationed in Patuxent River, Maryland, Bermuda, Lake Hurst, New Jersey, Puerto Rico, Pensacola and Jacksonville, Florida. He retired as a Senior Chief in 1973. While he was stationed in Bermuda, he met the love of his life, Pearl and they raised 3 sons.
After retirement, they moved back to Atlantic Beach. He went to work at Mayport Naval Station for the Special Services at the bowling alley and golf course. He retired from there after 30 years of service.
He is preceded in death by his mother, Elizabeth; father, Charles; brothers: Ted, Fay, Vincent; sister, Marion Marvin; wife, Pearl; as well as his good friend, Silvia Warren.  He is survived by his sister, Dorothy LeClair; sister in-law, Mary Cayea; sons Glenn and Charles, Jr of Atlantic Beach, Art (Dawn) of Switzerland, FL;  grandchildren: Gabe (Lynn), Rocky (Maricris) and Carolina Dupraw; 4 great grandchildren: Hayden, Kaitlyn, Jasmine and Isabelle Dupraw; and many cousins, nieces and nephews.
Visitation is 5:00-7:00 pm. on Tuesday, May 28, 2019 at Quinn-Shalz Family Funeral Home. His Funeral Service will be on Wednesday, May 29, 2019 at 3:00 p.m. in the chapel of Quinn-Shalz followed by Entombment at Beaches Memorial Park.