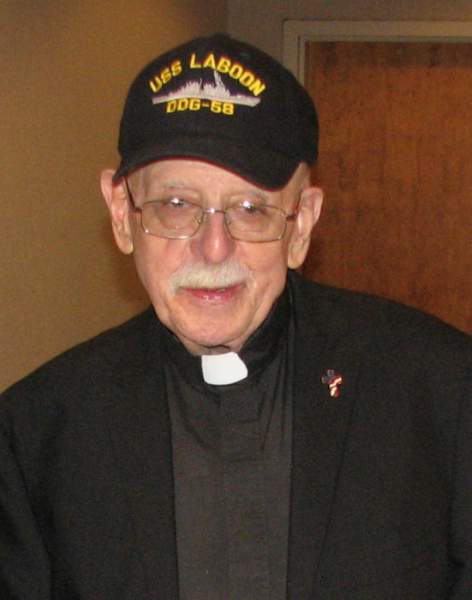 On November 11, 2018 CDR/Rev. Daniel F. DePascale CHC, USN (Ret.) passed on to be with the Lord. Father Dan was born in Amsterdam, New York in 1932 to Ciro and Josephine de Pascale and is survived by his sister, Dolores DePascale, of Amsterdam. Father Dan’s early education was at the Amsterdam, NY, Fifth Ward School and St. Mary’s Institute, graduating high school in 1950. Father Dan worked for General Electric in Schenectady, NY, in 1951 and 1952 at which time he discerned his vocation to the priesthood of the Roman Catholic Church. Father Dan studied at St. Andrew’s Seminary from 1951 to 1955 and then at the Seminary of Our Lady of Angels until 1961. Father was Ordained at the Albany Catholic Cathedral on May 27, 1961.

Upon ordination, Father Dan served at Our Lady of Mt. Carmel parish in Gloversville, NY and St. Mary’s Parish in Frankfort, NY.

Father Dan joined the United States Navy in 1965 and attended the U.S. Navy Chaplains School in Newport, RI attaining his commission as a Lieutenant in the Chaplain Corps of the Navy. Subsequent assignments ranged from Argentina, Newfoundland to the Republic of Vietnam. As a Navy Chaplain, Father Dan served both with our Sailors and our Marines. His Marine Corps tours of duty included the Second Marine Division at Camp Lejeune, the First Marine Division in Vietnam and the Marine Corps Bases in Quantico, VA, and Okinawa, Japan. With fleet Sailors, “Chaps” served at the Naval Stations in Norfolk, VA, Guantanamo, Cuba, Mayport, FL and Charleston, SC. After 25 years of service to our Nation, Chaplain Dan retired in 1990 to Ponte Vedra Beach, FL.

In retirement, Father Dan was active in supporting Our Lady Star of the Sea parish in Ponte Vedra Beach, and other local parishes, as well as the Sailors at the Mayport Naval Station.

Throughout his vocation, Father Dan has found true joy in helping and supporting families by officiating at their weddings and baptisms, the celebration of the Eucharist at Mass and in providing comfort to the sick and dying. Father Dan’s service to the communities in which he has lived has been truly superb! Thanks, Father Dan, for your faithful service to God and your country.

A Prayer Vigil will be held at 10:00am, Friday, November 30 in Our Lady Star of the Sea Catholic Church, followed by a Mass of Christian Burial at 11:00a.m. with Reverend Francesco Iacona as Celebrant.  Father Dan will be interred alongside his parents in Amsterdam, NY.