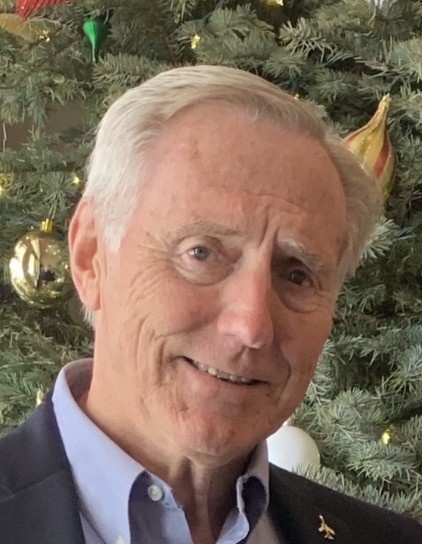 Bob England Coffman of Jacksonville, FL, passed away in his home surrounded by loved ones on Veterans Day, November 11, 2021, at the age of 76. Bob was the very devoted husband of Victoria (nee Davis) Coffman for 51 years. He was the loving son of the late Lindsay and Mabel Coffman, and brother of the late Linda (and Robert) Blackwood. He is also survived by his children Scott Coffman of Leesburg, VA, Amy (Robert) Wright of Ponte Vedra Beach, FL, and grandchildren Aidan Coffman and Emily and William Wright.

Fitting for the true Patriot he was, Bob was born in Washington, D.C., on June 7, 1945, and grew up in Silver Spring, MD. He received an Air Force ROTC Scholarship at Georgia Tech and graduated in 1967 from the aeronautical engineering program. He enlisted in the United States Air Force flight training program at Moody Air Force Base (AFB) in Georgia where he was a Distinguished Officer graduate. He trained to fly the F-105 “Thunderchief” at McConnell AFB in Kansas. Ranked as captain in the 563rd Tactical Fighter Squadron, Bob did his combat tour in the F-105 “Wild Weasel” mission to counter surface-to-air missiles of North Vietnam. He sat nuclear alert in the F-105 at Kadena AFB in Okinawa. He met his wife while stationed in Okinawa as she was visiting her cousin who was in the same squadron. They married in 1970. His first aviation job after the Air Force was with Gates Learjet Corp as a test pilot in Wichita, Kansas. This was followed by a move to Longwood, FL, in 1977 with his wife and two young children where he was a captain flying the Lear CE-500 for Red Lobster throughout the U.S., Canada, and Central and South America. He then flew for Midway Airlines for ten years commuting out of Chicago reaching captain status in the Boeing 737. Subsequent Midway, he was a captain with Tower Air in the B-747 with a World-Wide Flag, flying domestically and internationally to places including Indonesia, the Middle East, Asia, and even did long stents of transporting pilgrims to Mecca, Saudi Arabia. Flying for Atlas Air followed, as well at NetJets, where he was a line training captain and flew many interesting public celebrities. He retired from NetJets in 2007.

During his off time from flying, Bob still enjoyed “captaining” by boating up and down the east and west coasts of Florida with his family. Family-favorite marinas were South Seas Plantation (Captiva Island), Miller’s Marina (Boca Grande), and Longboat Key Marina (Longboat Key).

In his retirement, he kept up his friendships with those he served with in the Air Force, attending River Rats reunions. River Rats are the pilots who flew combat missions up the Red River Valley in North Vietnam. Bob also spent time watching his Florida grandchildren’s soccer and school events, or traveling to Virginia to see his son, Scott, also in the aviation business, and his family.

Bob also became involved with Caring Canines therapy dog organization with his beloved golden retriever, Annie Rose. They served in Winter Park, FL, participating in events at the library, “mom’s day out” programs, and senior centers. When Bob and Vickie moved to Jacksonville, FL, full time in 2017, Bob had Annie Rose certified as therapy dog with the Mayo Clinic. For ten years they brought joy and comfort to patients, family members of patients, employees, and even the physicians they visited on a weekly basis. Annie Rose can be found in the latest Mayo Clinic 2022 therapy dog calendar.

Bob will be remembered as friendly, courteous, intelligent, an animal lover, and a gentleman. He enjoyed meeting new people, keeping up with friends old and new, and mostly being the supporting and devoted father and grandfather of his family.

Blessed are those who have died in the Lord;

let them rest from their labors

for their good deeds go with them.

R/. And let perpetual light shine upon him

V/. May his soul and the souls of all the faithful departed,

through the mercy of God, rest in peace.

A memorial service will be held on Monday, November 29, at 11 a.m., in the sanctuary at Christ Episcopal Church at 400 San Juan Drive, Ponte Vedra Beach, FL. In lieu of flowers, remembrances may be made to the Golden Retriever Rescue of Mid-Florida, P.O. Box 1449, Goldenrod, FL 32733 www.grrmf.org.