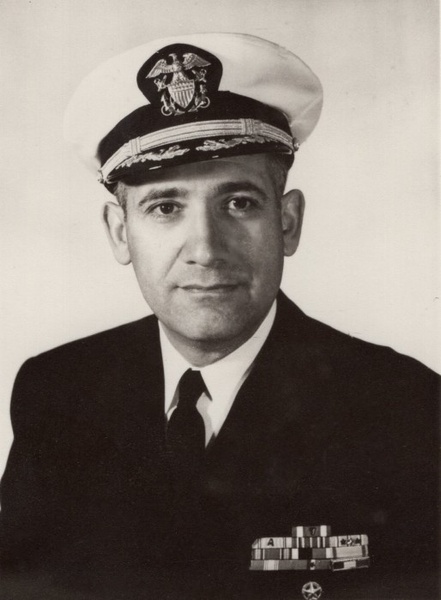 He is predeceased by his beloved wife, Genevieve.  He is survived by his son, Robert C. Parris, MD (Jeanette) and two grandchildren, Laura and Michelle, and his daughter, Dana G. Parris, MD.

After graduating from the University of Pennsylvania in 1940, he entered active service in the U.S. Navy as an Ensign and served on continuous active duty for thirty years until the end of 1970 when he retired in the rank of Captain.

His first posting was to the U.S.S. Augusta, flagship of the U.S. Atlantic Fleet.  The Augusta took President Franklin D. Roosevelt to Newfoundland in August 1941 where he met with British Prime Minister Winston Churchill, who arrived on H.M.S. Prince of Wales, to forge the Atlantic Charter.  After Pearl Harbor, Capt. Parris served on the U.S.S. San Diego and the U.S.S. Reno as part of Adm. Halsey’s Third Fleet.  In November 1944 he survived the torpedoing of Reno by a Japanese submarine after the Leyte Landings.  He remained aboard Reno as part of the salvage crew which prevented her from sinking and brought her to safe port.  After the war he served at sea aboard destroyers and destroyer tenders, including command of the destroyer U.S.S. Caperton and the destroyer tender U.S.S. Dixie.  Ashore he served primarily in Navy logistics, including tours of duty as commander of the Navy’s logistics facilities in Bremerhaven, Germany and Leghorn, Italy.  During the early fifties he operated a fleet of 75 troop ships in support of the Korean effort, and during the late sixties he operated a fleet of 650 cargo ships and tankers in support of the Vietnam effort.  For the latter he was awarded the Legion of Merit.

After retiring from the Navy, Capt. Parris took employment as the Washington, D.C. representative of Seatrain Lines Inc., a major steamship conglomerate that was engaged in carrying government impelled cargoes for the Departments of Agriculture, Defense, Energy, and State.  He served in that capacity for twenty years, retiring for the second time in 1990.

Arthur and Genevieve moved from Bethesda, MD to Ponte Vedra Beach, FL, and he resided at The Players Club since 1996.

Private interment will be held at Arlington National Cemetery with full military honors.