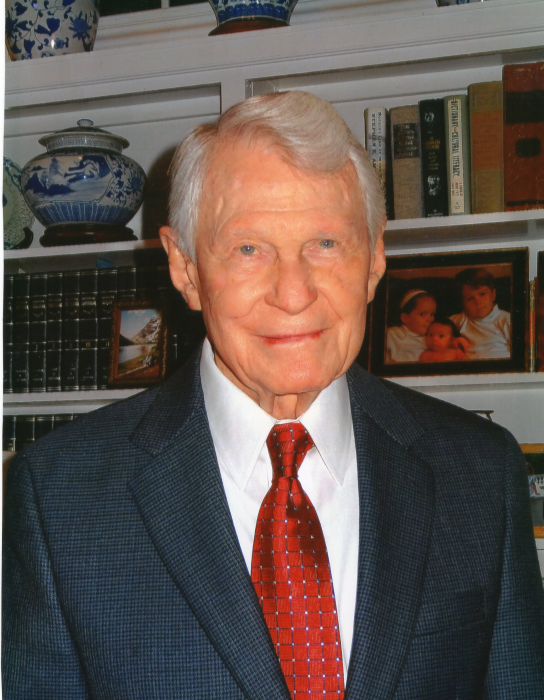 Amos Patterson Jarman, of Ponte Vedra Beach, Florida, died in his home on June 19, 2021 at age 98. He was born September 13, 1922 in Helena, Arkansas, the son of Whitley and Elma Jarman. He had two older sisters, Mildred Hyde and Whitley Potter who have predeceased him.

Growing up he was close with his family and aunts Jo and Fan. As the youngest in his family, he was affectionally called “Sony.” He loved nature and spent a lot of time outdoors. He was also known for his athleticism in football and track while in high school.

Amos attended University of Arkansas before joining the Navy. He transferred to University of Oklahoma as part of the V12 Engineering Program and completed his degree in Chemical Engineering. He was also a member of the Kappa Sigma Fraternity.

Amos worked 38 years of his career at E.F. Houghton Int’l, a large privately owned specialty chemical company. A career promotion to Sr. Vice President of Sales and Marketing moved his family from Memphis, Tennessee to the Philadelphia area. He worked there at the company’s headquarters for 13 years until his retirement.

In 1965 he married his beautiful and beloved wife, Virginia Jarman (Hall), in Memphis, Tennessee. They had a long and loving marriage and were just one month shy of their 55th wedding anniversary in July. During their many years together, they enjoyed travel across the United States and Europe for business and pleasure, gourmet dinner clubs with friends, tennis, and plenty of dancing.

The immediate family includes his only child and daughter, Amy Jarman Atkin, her husband, Alec Atkin, and grandchildren Addison, Audrey and Aiden who live in Granite Bay, California. Amos cherished his time with his daughter and her family who would frequently visit. He was especially close to his grandchildren and would entertain them with his humor, dinner stories, emphasis on manners, and challenging exercise routines.

Amos and his wife, Virginia, moved to Ponte Vedra Beach in 1989 following his retirement. Until recent years, Amos was a regular at the Fitness Club at Marsh Landing Country Club and The Lodge as well as on the tennis court with his family. He was a dedicated fitness enthusiast, lifting free weights and exercising through most of his 90s. He loved bird watching on the marsh outside his house and admiring nature. He was also an avid reader, donating over 350 books to the Ponte Vedra Beach Library.

Additional family includes his nephew who inspired his move to Ponte Vedra Beach, Victor Hyde, and his wife, Willie Hyde, who both have predeceased him in Jacksonville, Florida along with their children Whit, Stan and Amy and their families who reside in Jacksonville.

He and his wife have been longtime parishioners of Christ Episcopal Church in Ponte Vedra Beach where Amos attended services in the main sanctuary until recent years. Amos had many close friends in Ponte Vedra Beach from the church and neighborhood who he enjoyed spending time with.

There will be a memorial service at Christ Episcopal Church on July 1st at 3:00pm with a reception to follow in the Westbury Hall. In lieu of flowers donations may be made in Amos P. Jarman’s name to Mayo Clinic Department of Development Cardiology, 200 1st St. S.W., Rochester, MN 55905.