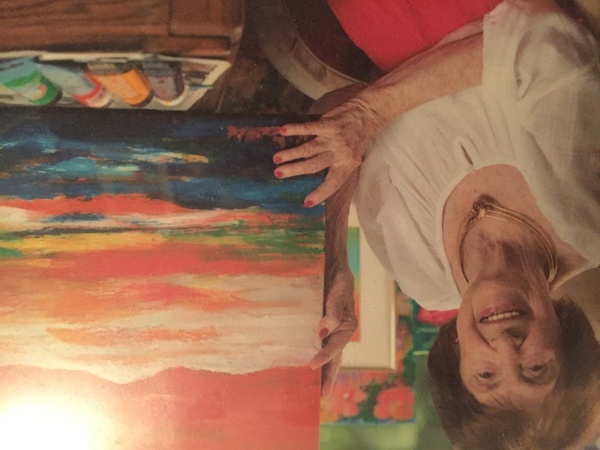 Alice Johnson Gartland of Atlantic Beach, Florida, passed away on 06 May 2021, surrounded by her loving family.  Born 27 January 1922 in Philadelphia, PA, to Nelson Johnson and Alice McDonald Johnson, Alice leaves a legacy of love and creativity.

Alice was best known in the Beaches community for her advocacy and hard work on behalf of the Arts.  She volunteered countless hours serving on cultural boards and commissions in Atlantic Beach, as well as the City of Jacksonville.  Alice’s advocacy began in the 1960s in Washington, DC., where she was a founding force behind the establishment of the Torpedo Factory Arts Center in Alexandria, VA, a magnet for creative culture and artistic expression for artists throughout the Washington, DC, area.   Her advocacy continued when she relocated to the Beaches in the 1970s.   She was the backbone of a movement to gain broader appreciation for the Arts through the establishment of the North Beaches Art Walk.  She also wrote a weekly Arts column for the Beaches Leader for over twenty years.  Through her column, Alice publicized shows and exhibitions taking place in the community featuring local and nationally recognized figures in the Art world.  Further, she effectively used her column to pursue and obtain funding for the Arts throughout the Beaches community.  Somehow, she also found time to serve as an Adjunct Professor of Arts and Humanities at Florida State College at Jacksonville – South Campus.

Alice was herself an accomplished artist, receiving many awards for her innovative use of oils and acrylics to create inspirational paintings which today hang in many homes throughout the Beaches community.  Her artwork, in the form of hand painted handbags of various sizes and designs, which she created even at 99 years young, have continued to be on display for sale at a local gallery.

Under the tutelage of renowned artist Gene Davis, Alice came to master the intricacies of abstract art, incorporating these concepts into visual expressions which so many throughout the Beaches came to treasure.

Alice drew upon her feelings to inspire and energize the paintbrush to translate her range of emotions onto the canvas.  Her goal was to motivate others to appreciate life in all its dimensions.  In so doing, Alice sought to entice others to discover and explore for themselves the vibrant universe of diverse artistic styles and innovation.

In addition to her artistic endeavors, she was an accomplished athlete, lettering in several sports in high school and maintaining an active lifestyle throughout her life, including traveling internationally.  She was also active in her Catholic faith communities including serving, with her husband, as one of the founding members of St. Agnes Catholic Church in Arlington, VA, and in various capacities at St. Paul’s, St. John the Baptist, (where she was commissioned for the creation and display of a life-sized painting of John the Baptist in the sanctuary) and Our Lady Star of the Sea parishes in the Beaches area.

Alice is preceded in death by her parents, brothers Nelson and Joseph and sister Catherine, daughter-in-law Donna, and beloved husband of 52 years, Henry.   She is survived by her brother, Charles, and sister, Virginia, sons Kevin, Michael (Peggy), and Sean (Alison), as well as eight grandchildren, ten great grandchildren, and a great-great grandson.

To have known Alice is to know firsthand that through love and perseverance each of us can make a difference, in our immediate families and throughout the broader community.  She is already deeply missed.

A Mass will be concelebrated by Father James O’Neal at Our Lady Star of the Sea Catholic Church at 545 A1A N, Ponte Vedra Beach, FL, on Friday, May 28th at 11:00, preceded by the Holy Rosary at 10:35, and followed by a short reception in the parish hall at 12:00.  Immediately following the reception, an art show featuring many of Alice’s creations will be hosted by her dear friend and fellow artist Linda Stewart at Archway Gallery & Framing, 677 Atlantic Blvd., Atlantic Beach, FL, 32233.   In Alice’s memory donations are encouraged to be made to the North Beaches Art Walk, the Jacksonville Watercolor Society, and the Jacksonville Coalition for the Visual Arts.  Donations may be made, in person or by mail, to Linda at Archway Gallery and Framing.

Final internment will be held at Arlington National Cemetery in Arlington, VA, where she will be laid to rest with her beloved husband at a future date.