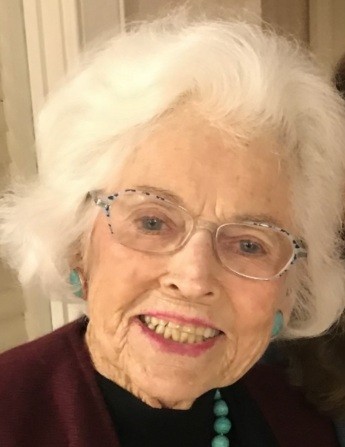 Agatha (Aggie) Lawrence Miller, 95, of St. Augustine, FL, passed away peacefully on September 29, 2021, surrounded by her children. She lived her life fully and joyfully until the very end.

Aggie was born in Valley Mills, Texas, on October 17, 1925. The youngest of six children, she shared stories of growing up in a small town in Texas, going on trail rides with her brothers and singing with her sisters. She was her high school salutatorian and a cheerleader, and she never met a stranger. Aggie became an RN planning to be a Women’s Army Corps nurse during WWII, but the war ended before she had the chance to serve. Instead, she became the practice manager and head surgical nurse for two surgeons, who she was so proud to work with. Then she met a handsome navy pilot, Roger J. Miller, and three months later they began their devoted marriage that lasted 59 years until Roger’s passing. During that time, she was a dedicated Navy wife, always creating a loving home despite multiple moves and transfers. She was a completely devoted wife and mother, and truly created a home filled with happiness and love, welcoming all with one of her trademark hugs. Other than her memories of her original family and her marriage to her sweetheart, her greatest joy was her closeness with her children and grandchildren, who loved her dearly and lost their greatest encourager. Her grandchildren lovingly called her “Nana”. Her independence, humor, and zest for life were an inspiration to all who knew her. She was vivacious and outgoing, and anyone who interacted with her left with a smile on their face and their spirits lifted. She had a generous heart for others and took it upon herself to help whenever she saw a need, and visitors rarely left her home empty-handed. Aggie was uniquely warm and loving, and she will be profoundly missed.

In 1989, after living in McLean, Virginia, Aggie and Roger retired to Marsh Landing in Ponte Vedra Beach, FL. She treasured the twenty years they lived there golfing, going to Jaguars games, traveling throughout the world, worshipping at Palms Presbyterian Church and enjoying her family and her many friends. They moved to Westminster St. Augustine (then Glenmoor) in 2010. Aggie believed she was never too old to make new friends, and did so cherishing her many friendships made there.

A memorial service will be held on Friday, November 12, 2021, at 2:00PM, at Palms Presbyterian Church in Jacksonville Beach, FL, with an outdoor reception to follow at Marsh Landing Country Club. In lieu of flowers, donations may be made in her memory to St. Jude Children’s Research Hospital at www.st.jude.org or by calling 1-800-822-6344. Donations may also be mailed to Tributes Processing, SJCRH, 501 St. Jude Place, Memphis, TN 38105. Aggie will be buried with her husband on January 10, 2022, at Arlington National Cemetery.